Called to the campus

In the 2005 study 'Spiritual Life of College Students' by UCLA’s Higher Education Research Institute, many students said that they enrolled in college to find their life’s purpose and they expected their college education to help them with their emotional and spiritual development. Findings included: 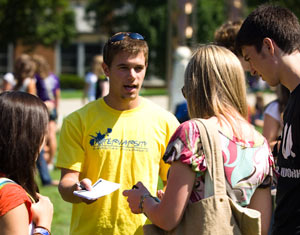 InterVarsity has been an active ministry on college campuses for more than 70 years. Student interest in spirituality has never been higher. We believe that the presence on campus of an authentic Christian witness contributes to the kind of campus diversity that students expect from an institution of higher learning.

As good citizens on campus, we assert that Christian organizations should have the right to require their leaders to believe and follow the traditional Christian principles and goals of their organization based, in part, on the free exercise clause in the First Amendment to the U.S. Constitution and, in part, on simple logic. We believe our chapters contribute to a positive campus environment through volunteer activities and the high moral standards required of our student members.

However, on a number of campuses, we are facing challenges to our ability to be an authentic Christian organization.

The Tufts Community Union Judiciary de-recognized the InterVarsity Tufts Christian Fellowship (TCF) due to faith-based requirements for leadership. TCF appealed the decision. The Committee on Student Life responded by instituting a new policy which allows student religious groups to use religious criteria in leadership selection.

The Student Association Senate at the University at Buffalo voted in April 2012 to derecognize InterVarsity Christian Fellowship. The vote was overturned by a ruling of the Student Wide Judiciary in July 2012.

Vanderbilt has placed on provisional status InterVarsity’s Graduate Christian Fellowship and several other Christian organizations until the issue of compliance with the University’s nondiscrimination policy is resolved. InterVarsity believes Vanderbilt’s nondiscrimination policy infringes on our religious rights by restricting our ability to use religious criteria to determine the leadership and the character of our organization.

InterVarsity is disappointed that Vanderbilt’s administration has not been responsive to the concerns expressed by its students. We remain hopeful that a position change is still possible that will allow InterVarsity’s Graduate Christian Fellowship and other Christian organizations to require their leaders to be practicing Christians. Any organization must have leadership that believes in its goals and purposes in order to remain active and relevant. We believe authentic expressions of Christian faith should be a part of the forum of ideas on the campus of Vanderbilt or any other university.

UPDATE: Please be in prayer for the Vanderbilt administration and Trustees, that they will decide to revise the nondiscrimination policy so that it does not discriminate against campus religious groups.

InterVarsity has been confronted with campus access issues for more than ten years. In 2002 InterVarsity filed suit against Rutgers University to defend the rights of our student chapter. On October 3, 2006, we filed action in federal court on behalf of InterVarsity students at the University of Wisconsin-Superior after the chapter was derecognized. We also raised concerns about the August, 2006, disaffiliation of our chapters on the campus of Georgetown University.  We are pleased to report that the Rutgers University, UW-Superior, and Georgetown University situations were agreeably resolved and that InterVarsity students in these chapters continue to be part of thriving, officially recognized, campus organizations. We are also pleased that concerns have been resolved without confrontation on a number of other campuses, such as at the University of Michigan.

The number of campuses which have asked InterVarsity to change our values and leadership standards has increased since the 2010 U.S. Supreme Court verdict in the case of Christian Legal Society v. Martinez. Since that decision, InterVarsity's status as a recognized student organization has been challenged on 41 campuses. InterVarsity is currently tracking a half dozen campus access challenges, all of which involve university nondiscrimination policies limiting the freedom of InterVarsity chapters to select leaders based on religious criteria.

We believe that the decision in the Martinez case is much narrower than schools often realize and we hope that all of these challenges will be resolved so that our ministry on campus is not restricted. We are encouraged by the 2012 Supreme Court Decision in the case of Hosanna-Tabor Church v. Equal Employment Opportunity Commission. Although it’s a narrowly written decision, the unanimous ruling of the justices endorsed the First Amendment principle of religious organizations being free from government interference in leadership decisions.

As Justice Samuel Alito noted in his concurring opinion in the Hosanna-Tabor case, "The First Amendment protects the freedom of religious groups to engage in certain key religious activities, including the conducting of worship services and other religious ceremonies and rituals, as well as the critical process of communicating the faith. Accordingly, religious groups must be free to choose the personnel who are essential to the performance of these functions."