“They” Are All the Same | InterVarsity
Skip to main content

“They” Are All the Same 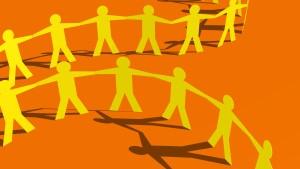 I attended one of those fancy-schmancy New England boarding schools that seem to only exist in movies. The average student at my school was White, wealthy, and unaccustomed to interacting with people of color like myself.

One afternoon, I was playing Ping-Pong in a dorm common room with my friend Carrie, one of the few Black students at the school. Another friend, a White guy named Josh, walked into the dorm while we were playing. I stopped to introduce Carrie and Josh to each other. But Josh interrupted me.

“We already know each other,” he stated matter-of-factly. Then, turning to Carrie, he said, “You’re in my math class, right?”

“Actually, no. I’m not in your math class,” Carrie responded.

Our boarding school prided itself on its small class sizes (less than 12 students). So really, you should know who is and is not in your math class.

But Josh was clearly confused. Scratching his head he said, “Well, there’s some Black girl in my math class who looks just like you.”

They Are All the Same

After investigating, we discovered that our friend Amber—a Black female student who looks nothing like Carrie—was in Josh’s math class. But as far as Josh was concerned, Amber and Carrie were the same person! According to him, all Black girls look the same.

To be fair, White guys like Josh aren’t the only ones who mistakenly perceive culturally different people as all the same. Social psychology research shows that people from China, Vietnam, and Japan perceive themselves as distinct from one another, but many Westerners have a tough time telling them apart. Older adults perceive younger adults as all the same and younger adults perceive older adults as all the same. Liberals lump together all conservatives. Drama majors like to talk about “math types” and math majors like to talk about “drama types.” Californians brag about their cultural and ethnic diversity while non-Californians talk of the “typical Californian.” And yes, White people often think that all Black people look the same.

Why does this happen? Why do we tend to perceive “them” as all the same? And how does this tendency affect cross-cultural interactions?

However, categorizing people can lead to some pretty serious consequences, one of which is what social psychologists call the outgroup homogeneity effect. We tend to view other cultural groups as homogenous. They are all the same. On the other hand, we tend to view our cultural group as heterogenous. We are all unique.

Without even knowing it, the outgroup homogeneity effect can influence our perceptions of diverse people and prevent us from leaving our homogenous cliques. This happens all the time in church settings.

We are certain that all of the women in the conservative church on the other side of town are pregnant and barefoot, even though we have not yet gotten to know any of the members of the church (or their many homeschooled children).

Speaking of homeschoolers, we are certain that they all are weird and socially awkward (this homeschooled author is no exception).

We are certain that all of the men who belong to the church with the female pastor are weak and need to read Wild at Heart (again).

We are certain that all students at Christian colleges are obsessed with getting married.

We are certain that all the people at a particular church vote the same way.

We are certain that all the people at the Pentecostal church are raging Pentecostals with overdeveloped sensory systems and underdeveloped theology.

In spite of our obvious lack of interaction with many other cultural groups, we tend to think of ourselves as experts on them. We already know what they are like, we tell ourselves. They are all the same. If I know one, I know them all. As a result, we stick to the people in our homogenous cultural groups whom we perceive to be far more nuanced and evolved than everyone else.

But when we become aware of our natural tendency to perceive other cultural groups as “all the same,” we can be on the lookout for all sorts of assumptions, and we can consciously choose to see other cultural groups as just as diverse, rich, and varied as our own. We’re much more likely to desire cross-cultural relationships when we see other groups in all of their diverse glory.

Christena Cleveland (@cscleve) is a social psychologist and author of Disunity in Christ: Uncovering the Hidden Forces That Keep Us Apart. She lives in Minneapolis and blogs at christenacleveland.com.

Dear Christena, Interesting reflections. I am concerned, though, that this post suggests that we are all on an even playing field- like, in-group/out-group dynamics can be applied to everyone, and that, as a result we are all essentially guilty of the same thing. I wonder, though, if this sort of approach, though friendlier to those who might not be willing to listen to these sorts of critiques, actually does more damage for those of us trying to make sense of the ways in which we are perceived as "culturally" different. By suggesting your first example is on par (equivalent in prejudice) with your subsequent ones (i.e. "homeschooled" kids), feels as though the structural/socialization problems with the first example are minimized, and that there aren't very real, felt, power dynamics explored in the differences between the examples you gave. The consequences in these examples are not only vastly different, but you also haven't account for how REAL prejudice aids in structural oppression.

What you described happened

What you described happened between your two friends at school happened to me at a mostly white, suburban church I used to attend. One of the pastors insisted he saw me at a shopping center that I know for a fact I was not at. He didn't make the black comment, but it was clear he had confused me with some other black woman. Another time, I invited a black friend to church with me for a concert and a few days later someone comes up to me and says, "You and Tina look alike. Why is that?" Say what?! I just shrugged and walked away. How do you even answer a question like that. Had I been thinking quicker on my feet, I would have made up some smart-ass answer about genetics.