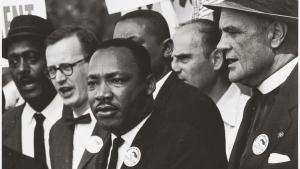 August 28 marks the fiftieth anniversary of Martin Luther King Jr.’s “I Have a Dream” speech. At 34, Dr. King was not much older than I am now when he stood before the crowd of 250,000 people gathered on the National Mall.

Whether you watched his speech live or weren’t even born when it happened, watch it now. The whole thing, not the abbreviated versions. I can’t imagine what it would have been like to be there in person; it’s electric to me even in its slightly blurry, 1960s black-and-white recording form. Hopeful. Sober. Inspiring.

We will not be satisfied until...

Dr. King declared that day that “1963 is not an end, but a beginning.” He went on to say, “We are not satisfied and we will not be satisfied till justice rolls down like waters and righteousness like a mighty stream.”

2013, fifty years later, is clearly not a beginning. Dr. King and others laid a foundation that we’re still building on.

It struck me as I watched that, had Dr. King not been assassinated, he very likely could have watched the first Black president of the United States be sworn into office not far from where he gave his historic speech. Imagine...

Were Dr. King alive to give another “I Have a Dream” speech at the age of 86, he’d have no trouble coming up with present-day examples of the need for racial reconciliation. I think he would still be longing for the justice as described by Biblical prophets like Amos. I think Dr. King would still be dreaming.

Which means we need to keep dreaming.

What You Can Do

So let's dream together, all of us—students, staff, alumni, everyone who finds their way to this post. Where have we gotten it right? Where is God’s justice being done? And what’s your dream for freedom and equality as we move forward?

1. Create a spoken word piece (and accompanying video, if possible) or create a written reflection inspired by Dr. King’s “I Have a Dream” speech and the foundational truths underlying it.

2. Starting Monday, August 26, post the video on Facebook or a link to your written reflection and tag @INTERVARSITYusa. We’ll reshare some on our Facebook page Monday, Tuesday, and Wednesday (the actual anniversary of Dr. King’s speech).

We hope this creative collaboration helps us listen to each other better, lament and repent of our sin in the area of ethnicity and equality, and move forward with a renewed commitment to seeing God’s justice done for all people. Like Dr. King, the people of God need to bear the message of hope.

Will you join us?

More importantly, will you join God’s work of reconciling all people to himself and then to each other, affirming the value of every person as one made in his image?

Dream. Create. Share. Inspire. Listen. And let us keep doing the hard work of fighting for justice and equality.