7 Tips for Asking Out Your Dream Girl 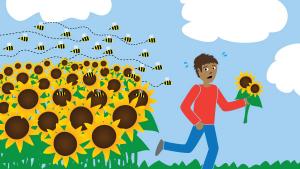 My girlfriend and I have been dating for two years, and she still remembers vividly the way I pursued her in the beginning. I believe she’ll remember it forever, not because it was extraordinary or unique, but because it was strategic.

Asking a girl out, I’ve realized, is like a game of Battleship. You throw out random signals in the dark hoping that one might hit the target. Not all do, and that’s okay! You make note of the ones that do and don’t, and you keep moving forward till you “win” (and she says yes).

I might not be an absolute expert on all things dating, but here are some steps that worked for me.

This is an obvious one, but you would be surprised how many people misunderstand it. Getting to know her does not mean scouring her Facebook profile. It does not mean compiling research from all of her friends. It means taking the time to ask her questions and to listen.

2. Be willing to get uncomfortable.

When I asked out my girlfriend, I wanted to give her sunflowers (her favorite flower—which I knew because of tip #1). We actually had a sunflower garden on our campus, so I went there with a pair of scissors to perform the deed.

One horrifying obstacle stood in my way, however: bees. I am deathly afraid of them and the garden was filled with them. I took a deep breath, cut some sunflowers, and ran out of there as fast as I could. To this day, she has never forgotten how I risked my life (exaggeration, I know) in order to give her flowers.

Be daring enough to put yourself in these uncomfortable situations. I promise you—she’ll remember them.

Guys typically enjoy shoulder-to-shoulder time. This means we can be perfectly content hanging out with someone else by playing video games or watching TV or surfing the Internet. But while this might sound like a blast to us guys (it does to me), girls typically enjoy face time—time where two people actually engage with one another.

If you’re planning to ask a girl out, first take the time to hang out with her face-to-face, not just shoulder-to-shoulder.

5. Have her help you with something.

This was my number one tactic on the road to asking my girlfriend out. I pretended to need her help filling out a form that I was perfectly capable of doing by myself. That’s how desperate I was to hang out with her—I had to invent an excuse! However, to this day, she still remembers how she aided me in completing that form.

Though I invented an excuse to spend time with her, I encourage you to find an area where you actually do need the girl’s help. It could be anything from solving a math problem to putting together a craft. Whatever it is, the fun will probably not be in the solution you both produce; it’ll be in the time you spend together.

They say opposites attract. I don’t believe this is always the case, however. When you’re in conversation with a girl, don’t focus on opposites. If you do, you’ll find that your conversation becomes a tug-of-war to see who can top whom on whatever topic. Instead, focus on similarities. Similarities allow you to fully connect with one another.

My girlfriend and I, for example, clash when it comes to music. While I respect her taste, it’s different than mine. She likes country. I like rap. Yet when we were first getting to know each other, we connected over how we both like worship bands that sound like Mumford & Sons. Two years later, she still likes country and I still like rap, but we wouldn’t be able to appreciate those differences in each other if we hadn’t first discovered our common love for folk music.

One couple I know told me that after a while of going out one on one, they just assumed they were dating. Surprisingly, situations like that happen all the time. So my last bit of advice for you is to actually ask her out. She’ll respect you for doing so. And ask confidently, knowing that her response, whatever it is, does not change your character and value, or who you are in any way.

Let me also say, however, that confidence does not mean being cocky. Don’t be too sure that she’ll say yes. Having a level of mystery bubbling under the surface can make it more fun.

In the end, there are a number of ways you could approach asking out your dream girl, but the number one way is to stay focused on God and see where he directs your path. Trust me—God is the best wingman there is.

Neal Samudre (@NealSamudre) is an InterVarsity alumnus from James Madison University, a collaborator with

I'm a girl, and I've never wanted to be pursued. Try not to make general statements like that. I think that women should be more active in getting what they want out of relationships.

Thank you for your great

Thank you for your great tips! You are absolutely right. I have subconsciously gone through all your 6 first steps, but the last one is really risky. I don't wanna blow out my friendship with my dream girl. We are co-workers, and we have been going out a few times already, but she does everything to let me know that we are not a couple yet. I know what she likes, we have a lot in common but still that fear that she will say NO.

By Debra K. Fileta
Why There’s No Such Thing as a Soul Mate

I’ve met more than my share of singles who are sitting around, waiting for their soul mate—as though one day, there will be a magical knock on the door and “poof,” their soul mate will be standing on the other side. But I think this philosophy of a “soul mate” has done far more harm than good in our society.

By Adam Jeske
How to Have Sex: Relationship Advice for Guys

Sex is a good thing. You might even get to have some, if you follow these steps.