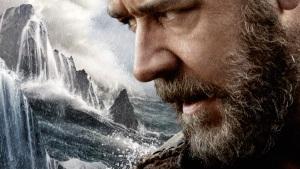 I’m both inspired and haunted by a phrase from John 1:14 describing Jesus: Full of grace and truth. I was reminded of this verse while watching Darren Aronofsky’s film Noah, which comes out on DVD today.

So often, I err on one side or the other, either extending grace but ignoring the truth, which makes me an enabler of both my own sin and that of my friends. Or I am full of truth but lacking in grace, coming down hard on those I am trying to exhort.

Aronofsky’s Noah is about that struggle.

Imagination, Midrash, and the Man Behind the Movie

There has been a lot said about the film already, some of it profound and some of it ludicrous. Yes, it takes a number of liberties with the story, though very rarely actually contradicting what the Bible says happened. Mostly, it fills in the gaps in imaginative ways. Aronofsky is Jewish, and the Jews have a name for this kind of storytelling: midrash. It’s an ancient and honored tradition.

I like midrash, and took Aronofsky’s imaginings for what they were: one man’s telling of a story that each of us, if given the chance, would probably tell a little differently.

The End of the World?

Aronofsky’s telling puts emphasis on the seeming dichotomy between grace and truth. Noah sees the truth of the situation all too clearly: humans are wicked and full of sin, and that sin is destroying everything—himself, other people, and creation itself. Creator has decided to send a flood to cleanse the Earth, and has chosen Noah and his family to build an ark to house the survivors—every kind of animal, as well as themselves.

Noah is both wise and humble enough to recognize that the sin disease that has wrecked everything exists in him and his family as well. This, to me, is a marvelous revelation: Noah does not divide the world into “us” (whom God loves) and “them” (whom God hates). Indeed, he recognizes that if his children bear children, the flood will fail to solve the problem of sin. And so he comes to believe that he and his family are supposed to be the final family—that when they die, the Earth will be completely cleansed of humans and their sin.

But this is where Noah fails to understand God’s plan, and chooses truth over grace.

A Noah I Know

Let’s pause for a moment. Perhaps one of the most important ways that Aronofsky diverges from the biblical record is that he removes God as a character from the story, though God is still very much present in the film.

This manifests itself particularly in the way God communicates with Noah in the movie. Instead of an audible voice, he speaks through visions and dreams, and perhaps through an inner voice that interprets those.

In interviews, Aronofsky has defended his decision by saying that every time you cast an actor to play God, you demean the infinite, omnipresent Creator of the universe. I agree with and respect that.

But his choice also has another effect that I appreciate: it makes Noah more relatable. Most of us do not hear an audible voice from God. Instead, God often chooses to speak to us in the same ways he speaks to Aronofsky’s Noah: through dreams, images, and an inner voice we recognize as not our own.

And, when God speaks, we often respond the same way Noah does in the film: we think we know what we’re supposed to do, so we proceed in faith, with trembling. When Noah first receives the dreams and visions, he does the right thing, sharing them with people he trusts (his wife and grandfather). They help him understand what the visions mean. And he listens.

But then Noah stops listening (which is also something we're prone to do). He tries to get ahead of God, to anticipate the Grand Plan, though God has only shown him a small piece of it. He ignores the counsel and pleading of people he used to trust. Noah becomes so rigidly certain that he knows what God is trying to do that, even when he is presented with a miraculous act of God’s provision (a miracle he prayed for earlier in the film), he sees it as nothing but a threat that must be eliminated.

Aronofsky’s Noah is a man who creates God in his own image. He has seen the wickedness of humans, and cannot imagine that God would have any grace for him or his kind. But—perhaps because Noah is made in the image of God—he cannot carry out his own invented orders. Noah believes he has failed God, but what really happens is that the false image of God he created comes crashing down. And once again, it’s the people around him who are able to show him a truer, clearer picture of God—a God full of grace and truth.

Noah’s struggle to see the fullness of both parts of God’s character is one I can relate to, but not one I’d ever seen depicted in the story before. Watching the film helped me realize (again) just how important community is to our spiritual lives. It's when we try to listen to God alone, ignoring those whom God has given us to help us understand the fullness of his character, that we swing wildly from grace to truth and back again.

Even more, whether or not Aronofsky believes in God, his retelling of Noah gave me a glimpse of God’s glory, the glory of the one and only Son, full of grace and truth.