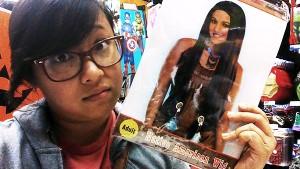 Halloween is one of my favorite days of the year. I love designing a clever costume, getting dressed up, and eating way too much candy! It’s the one day of the year when we get to pretend we’re something we’re not. We have the opportunity to disguise ourselves as something “other,” something different from normal, even something bizarre.

But when someone’s culture and heritage become the costume, we send the wrong message.

Halloween costumes basically come in three flavors: scary, funny, or fantasy. Someone’s ethnic identity really doesn’t fit into any of those categories. Which means using a culture, race, or ethnicity as a costume is not appropriate. Ever.

By using people’s identities as costumes, we imply that they are “not one of us,” or not even fully human, belonging instead to the realm of ghouls and goblins. With so much separation and misunderstanding between races, using caricatures of cultures to try to get a laugh is simply not helpful—and, in fact, only serves to increase the hurt and division. Moreover, using limited traits to symbolize the entirety of a group of people is a poor substitute for the intricacies and complexities that God created in each of us through our cultures and heritages. Ignorant and inaccurate stereotypes serve to belittle the richness of God’s people.

In the U.S., we spend the entire year marginalizing people of color, keeping them in the background on TV, in movies, and in the media (Apu on The Simpsons, Mr. Yunioshi from Breakfast at Tiffany’s), but then we suddenly become hyper-interested in “appreciating culture” for one offensive night. (As though dressing as a Hollywood version of what you think a culture is has anything to do with appreciating it.)

Moreover, when we claim that it’s all “good harmless fun,” we reveal our privilege of never having to face the consequences of such stereotypes in our own lives. We reveal the power we hold to dictate who defines “harmless” and “fun.” We reveal our harmful tendency to imagine fantasy worlds for real cultures while ignoring the historical baggage that makes us feel uncomfortable.

A couple of years ago, Students Teaching About Racism in Society (STARS) at Ohio University began a poster campaign to educate people about the hurtful nature of racist costumes, using the slogan “we’re a culture, not a costume.” Before dressing up on Friday night, be sure to check out their full collection of posters. Then, refer to Austin C. Brown’s guide to finding culturally appropriate costumes. And if you’re looking for some clever alternatives, check out Take Back Halloween, or try some new themes this year.

Let’s enjoy all the fun that Halloween has to offer while remembering to love and respect our sisters and brothers—on Friday, and throughout the year.