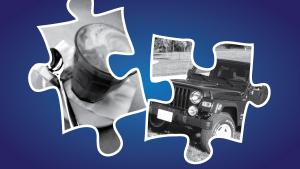 If it was up to eHarmony, my husband and I would probably still be single. Why? Because in so many ways, my husband and I are not compatible. For example, here’s how we would have answered some of eHarmony’s profile questions:

What is the most important quality that you are looking for in another person?
My husband: love of outdoor adventures
Me: stability

How do you typically spend your leisure time?
My husband: hiking, rock climbing, mountain biking, off-roading, soccer, and paintball
Me: journaling, reading books, going to a coffee shop, gardening

Other than your parents, who has been the most influential person in your life and why?
My husband: college roommates because they push me to be more adventurous
Me: Dietrich Bonhoeffer because he radically lived out his faith

On paper, we don’t seem all that compatible. In fact, if I had received my husband’s profile via eHarmony, I would have outright rejected it based on a few key phrases like “off-roading,” “paintball,” and “loves adventure.” Those phrases in particular conjured up negative stereotypes for me and indicated only one thing: we’re not compatible.

Now don’t get me wrong. I actually have nothing against eHarmony or any other online dating service. I’ve had six seven eight friends so far use an online dating service, receive matches, pursue a match, fall in love, get married, and stay happily married. And according to eHarmony, 5 percent of all new U.S. marriages began on eHarmony. So I think online dating services, like any other dating method out there, work for some people and not for others.

But as I watch more and more of my friends try online dating, I can’t help but wonder if services like eHarmony exaggerate a common dating myth: your partner must be 100 percent compatible with you.

Truth #1: You always marry the wrong person. Stanley Hauerwas, an ethics professor at Duke University, sums this idea up best in his book A Community of Character when he states:

The assumption is that there is someone just right for us to marry and that if we look closely enough we will find the right person. This moral assumption overlooks a crucial aspect to marriage. It fails to appreciate the fact that we always marry the wrong person. We never know whom we marry; we just think we do. Or even if we first marry the right person, just give it a while and he or she will change. . . . Marriage, being [the enormous thing it is,] means we are not the same person after we have entered it. The primary challenge of marriage is learning how to love and care for the stranger to whom you find yourself married.

Truth #2: Marriage is built between two sinful people. Two people could share everything in common in terms of likes, interests, and personality. But let sin enter the picture, and a seemingly compatible couple can quickly become the most incompatible pair. Tim Keller writes in The Meaning of Marriage:

Some people in our culture want too much out of a marriage partner. They do not see marriage as two flawed people coming together to create a space of stability, love and consolation. . . . Rather, they are looking for someone who will accept them as they are, complement their abilities and fulfill their sexual and emotional desires. This will indeed require a woman who is “a novelist/astronaut with a background in fashion modeling,” and the equivalent in a man. A marriage based not on self-denial but on self-fulfillment will require a low- or no-maintenance partner who meets your needs while making almost no claims on you. Simply put—today people are asking far too much in the marriage partner.

Truth #3: Compatibility takes time and work. According to a Psychology Today article titled “The Truth About Compatibility,” “Compatibility does not hinge on some personal inventory of traits. Compatibility isn’t something you have. It’s something you make. It’s a process, one that you negotiate as you go along. Again and again. It’s a disposition, an attitude, a willingness to work.”

My husband and I have both had to deal with a lot of “junk” over the past decade—both from our own sin and from what life has chosen to throw at us. But in reality, working through it together (emphasis on “work”) has brought us closer.

As my husband would say, to build muscle you must tear it a little first (that’s what you do when you lift weights), and through the healing, the muscle gets bigger and stronger. This has been true for everything in our relationship, from the way we argue to how we approach finances. We are learning how to navigate topics (like money) that used to be huge points of contention, and in the end, we are better individually and as a couple for it.

Truth #4: There is beauty in the incompatibility. As I mentioned before, there are a lot of differences between my husband and me. And we’ve had to work through a lot of those differences. But as we’ve learned what it means to become one in marriage, our differences have made our marriage stronger and more interesting. I’ve learned a lot about soccer. My husband has grown to appreciate gardening. I’ve discovered I can actually be more adventurous than my husband, and my husband is often the stable one in the relationship. In the end, we’re actually a lot more compatible than anyone would have guessed.

So what’s the point of all this? To give up online dating services?

The point is, the next time you’re about ready to dismiss someone on an online dating service based on your initial reaction that “they’re not compatible,” or “I could never date someone who . . .” give it a second thought. It might just be worth the risk. Do you agree?

Sarah Kirk works as a communications data coordinator for InterVarsity.

You took the words right out

You took the words right out of my mouth. :)

By Andrea Emerson
3 Things about Sex, Dating, and Jesus

When I find out two people are dating I assume they’re also having sex. Statistically, this assumption is pretty safe. Our Western culture presupposes dating and sex are a package deal. And campus hook-up culture suggests that the dating part of the package is optional.