Even a Witch Can Be Saved | InterVarsity
Skip to main content

Even a Witch Can Be Saved 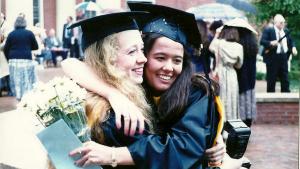 I came to college a 17-year-old witch. Literally. I had been deeply involved in the occult for many years, so you can imagine my surprise when I moved into my freshmen dorm and found myself sharing a room with two…Christians. Of course, I didn’t know that’s what they were at first. All I knew was that I had never seen anything like them in my life. They were aliens to me. Aliens with Bibles. But by November of that first year, I committed my life to Christ. How did such a dramatic

turnaround happen? The obvious answer is that we serve a God who is able and willing to rescue people from the pit no matter how lost they are (Read the whole story here). But the Christians I encountered during college played an important role. As I reflect back on what impacted me, a few things stand out. Things that are easy to do on your own campus.

I know that sounds so obvious but I noticed this. They cared enough to find out about me, to ask me about my life and to care what happened to me. When you genuinely care for others, they are naturally more open to hearing from you about what’s important in your life. The irony is that I was extremely extroverted and looked like I knew everyone. But they saw past that exterior and were willing to befriend me.

And they kept inviting. I probably turned down dozens of invitations before I finally said yes. It took me a long while to feel safe enough to go with them to those mysterious meetings they kept running off to. If they had stopped asking, if they had given up, then I may never have landed at that Intervarsity meeting that was the catalyst for a radical life change.

3. They lived their lives.

Right in front of me – all the time. They read their Bibles. They studied it. They prayed. They genuinely believed that God heard them and that he had the answers to life. That’s a pretty radical notion to those outside of the kingdom gates! They weren’t perfect – they had flaws just like everyone else – but I could tell by watching them that their lives were different because of what they believed. They handled everything differently because of their faith. And it made a difference.

If you’re willing to live your life out in front of others in a genuine way, then it can open all kinds of possibilities to share your faith with those around you. And while you may not immediately see the kind of impact you are having, you are most certainly affecting people around you by living a life of faith. You never know who is watching to see if they can trust you enough to share their questions, to ask you why you chose God. I’m very grateful to those Christians who came to a secular campus and were the salt and light I needed in my life. So take courage and live that life of faith out loud!

Sarah Anne Sumpolec, an InterVarsity alumna, writes and speaks to teens and twenty-somethings when she’s had enough coffee and isn’t shuttling her kids around. You can find out about her teen fiction series and her story at her website www.anakedfaith.com.