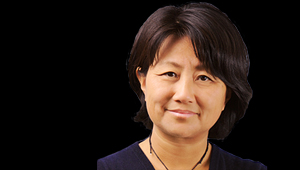 Chai Ling knows that students have a powerful voice in the world—she was a leader in the Tiananmen Square strikes in 1989. But since escaping to the U.S., she’s also come to know that human efforts alone are unable to end injustice—only God can.

We’re excited to have Ling speak to thousands of students at Urbana 12 in December. As the founder of All Girls Allowed, a nonprofit organization that raises awareness and fights the injustice of gendercide in China’s policies, Ling will challenge students to follow God’s call in the toughest of places. Here’s her story.

How did you become a Christian?

The turning point came when I went to a U.S. Congressional hearing on China’s forced abortion practice. There, a young Chinese woman told about her traumatic experience that had brought her to the verge of life and death, and then described the saving power she found in putting her faith in Christ. I remember that the woman wept as she told her story. Her testimony struck me to the core and made me wonder who could help the millions of other women like her in China. I realized then that only God could stop such extreme brutality.

I finally gave my life to Christ on Friday, December 4, 2009. I knelt in prayer in the corner of my office in Boston and I found true freedom and security in Jesus—he had saved me, and I knew he could save China.

Today I know that God has always been present in my life. It was God that had enabled me to go to Beijing University, where I first encountered the Christian faith, and it was God who watched over and protected me during Tiananmen. He enabled me to escape China and build a new life in America. I believe that I survived to fulfill God’s calling upon my life: to help bring the love of Jesus to China by serving the nation’s undervalued women and girls.

How has your faith influenced your plans and your hopes?

Only when I came to know God’s love did I realize that he is working right now to free China: to give the Chinese people the chance to experience the full freedom that can only come from the gospel of Jesus. He has already won the victory, and has taken away every burden. China will come to freedom one day because God has promised to bring restoration to the world—so I no longer feel hopeless when I see the crushing weight of oppression that Chinese women face. Instead, I know the joy of being Jesus’ servant in helping him bring about that restoration.

Words cannot express how profoundly this assurance affects the way I view the future. I used to struggle when things did not go according to plan, but now I know that the success of my efforts depends on God alone. It’s a deeply liberating thing to know.

What prompted you to start All Girls Allowed?

Right after I was baptized in 2010, I received a visit from several workers with ChinaAid, an organization that helps the persecuted church. They met with me and asked me to pray about starting an effort to work against the effects of the One-Child Policy.

I was resistant at first—I didn’t feel prepared to lay aside my business plans to start a ministry—but the evening they left, I encountered a sermon on Matthew 16:24-26. . . . The passage reads:

Then Jesus said to his disciples, “Whoever wants to be my disciple must deny themselves and take up their cross and follow me. For whoever wants to save their life will lose it, but whoever loses their life for me will find it. What good will it be for someone to gain the whole world, yet forfeit their soul? Or what can anyone give in exchange for their soul?”

As a new Jesus-follower, I listened and obeyed. We launched All Girls Allowed that June 1 on the steps of Capitol Hill.

What do you hope college students and recent grads experience at Urbana 12?

I am praying that students who experience Urbana 12 will have their eyes opened anew to the way God is at work in the world. I hope that they have a full measure of courage and assurance in knowing that Jesus already has the victory over injustice and sin.

I hope, too, that they are fully inspired to act, knowing that they are the vessels through which God has chosen to display his glory. When they proclaim Jesus’ name and fight injustice, they are glorifying the God who blessed them and made them to be a blessing.

After spending several years as a writer with InterVarsity Christian Fellowship, Abigail Zimmer is now working on her MFA in poetry at Columbia College Chicago. She likes Old English, the sassy blues of Janis Joplin, and futzing with cameras. She blogs on art and good people at www.offthefrontporch.wordpress.com.

David Platt to Speak at Urbana 12

Ram Sridharan to Speak at Urbana 12

Geri Rodman to Speak at Urbana 12

I was very impressed with the

I was very impressed with the highly personal, yet systemic, societal, and global contexts of her story of pain, suffering, gospel, justice, and transformational vision. After her presentation my wife and I prayed and visited her ministry web page and saw a video asking for 37 seconds of prayer. Brief but powerful summary video, to the point here https://vimeo.com/28955802 I hope her testimony at Urbana gets a lot of views and prayer support. Thank you, Urbana team for including this powerful and prophetic presentation to students, staff, professionals, and missionaries alike.

What is painfully obvious is

What is painfully obvious is that Chai Ling is using religion as part of her life-long rehabilitation and reconstruction campaign as an attempt to 'atone' for the blood on her hands, for exploiting the murder at Tiananman Square and the sacrifice of the brave students who died, to save her own miserable skin. I put quotes around 'atone' because there is no danger of her atoning for anything. People who pulled the triggers may one day come to realise the brutality of their actions, and repent. Chai Ling will enjoy no such prospect. Instead of facing the enormity if what she has done, she continues to live in denial, expending huge amounts of energy on whitewashing her life, because the truth of her betrayal is even more perfidious and evil than the ones who ordered the killing. She certainly does not lack in cunning. She knows by embracing and converting to Christianity, and making all the right noises, she can win the uncritical, un-calibrated support and enthusiasm of Christians, because her deception is now couched in religious dogma. Christians are now powerless to even give the smallest murmur of dissent or apply the tiniest piece of analysis to what she says. This would be 'heretical.' In other words, she's taken you for a bunch of suckers, and you've swallowed it hook, line and sinker.