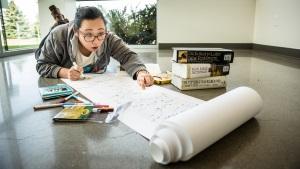 Hopefully not too many of you were fooled by this April Fool’s Day post. We’re leaving it up for your enjoyment, because we’re helpful like that. But try not to cry too much over the fact that Prayola markers do not actually exist . . .

InterVarsity Christian Fellowship has a long history of innovating new methods to enhance Christian discipleship and Scripture engagement. After years of student and alumni demand, we’re excited to announce the latest fruit of that commitment: a new version of the Bible, the InterVarsity Manuscript Study Version (IMSV).

Unlike standard Bibles, the IMSV will contain the entire texts of the Old and New Testaments on one continuous length of paper. When completely unfurled, it will stretch to over 700 yards, or roughly one megachurch sanctuary length. Scripture texts will be printed manuscript-style, featuring extra-wide margins for writing notes or observations. And the paper itself is ivory white from treatment in a proprietary chemical bath, so that every inch mimics the feel of writing in a Moleskine notebook.

“For years now, we’ve recognized that there is a gap in the personal Bible market that, frankly, no other publisher seemed willing to fill,” said Walt Edelen,* Lead Visioneer and VP of Research and Development with InterVarsity Press. “Other organizations have done great work bringing the Bible to as many Americans as possible—multiple translations, different packaging, and Bibles for wilderness survival gurus, stockbrokers, go-kart champions, you name it. But they all had one thing in common: They still had lots of pages.

“Over the years we heard from so many people: ‘I love inductive Bible study, and I wish my Bible was printed in manuscript form—one boundless scroll of paper with cavernous margins everywhere. When will there be a Bible like that for me?’ Well, today is the day.”

The genesis of the IMSV came from an impromptu lunch meeting between Edelen and Shari Pollock,* Lead Creative at InterVarsity Press. “Shari’s a ‘new wineskins, new wineskins!’ kind of person—always has been,” said Edelen. “At first I thought actually trying to pull this off was crazy—I mean, what printer would do it? But the more she talked, the more I bought into it. Finally, I just blurted out, ‘Let’s go for it!’ I never say that. It was a total God thing.”

In addition to the IMSV, InterVarsity will also debut InterVarsity Prayola markers for use with the manuscript Bible. Each box features specially named tints such as Urbana Blue, Find Your Life Pink, Cedar Brown, and Sunrise Quiet Time Orange. Every Prayola color has been scientifically tested for maximum brightness on Instagram.

InterVarsity’s core ministry, of course, is to students, and Pollock thinks students will especially love using the IMSV. “The manuscript Bible study experience has long been a foundational part of InterVarsity life,” she said. “The IMSV takes Bible study to the next level. You’ll never observe a connection you can’t note. You’ll never have an interpretation you can’t scrawl out in the margins.”

“Just imagine you’re a student going to small group: the leader passes around manuscript pages, and then you whip out this behemoth? Now you’re ready to study the Word,” she added.

“I mean, technically, you can’t whip it out. But when you drag it off its accompanying handcart . . . You get what I’m saying.”

Not just students will benefit from the IMSV. “For years, adult alumni of InterVarsity chapters have been sending us fan mail about manuscript Bible study,” Pollock continued. “We think they’ll really engage with the scroll format.  Unspooling the paper to a passage of Scripture and curling up on the floor for some intense manuscripting—it will take people back to their time in an InterVarsity chapter, a time of exciting firsts, like when they first noticed the chiastic structure in Mark’s Gospel, or discovered their favorite colored pencil for highlighting proper nouns.

“Plus it stores so well. With two people it can be moved easily to anywhere in the house.”

InterVarsity students and staff who tested the IMSV in its early stages are excited about the possibilities it opens up.

“That’s always been my complaint with standard Bibles—I have to keep flipping pages to get to things,” said Ayana,* a senior at North Carolina State. “It’s a pain. I do that enough with class. But now I never have to worry about that. Every word is right there—I just roll and unroll.”

“The pages of regular Bibles are too thin for the intensity of my studies,” said Jeremy,* a sophomore at Boston College. “Once when I was highlighting every instance of the word ‘love’ in 1 John, I got so fired up about God’s goodness that my pencil tore a hole all the way to Revelation 12. That was a bummer.”

For Arizona State University senior Tomas,* the IMSV has great potential as a conversation starter on campus. “I can imagine walking around and people saying, ‘Do you need a hand there?’ or ‘Hey, why do you have a radiator in your backpack?’ It’s a chance to start a conversation about spiritual things.”

Industry feedback has already been positive as well.

“It’s a bold move,” one publishing executive said. “Real bold move. Look, a lot of us have talked about this idea in the past. Believe me, it’s been kicked around. But I never dreamed anyone would have the brass to go and do it. Standard book Bibles always sell, so for us, why mess with a good thing? But that’s what separates InterVarsity and InterVarsity Press. For them, it’s ‘go big or go home.’ Every. Single. Time. They’re magnificent.”

*Name (and person) made up to protect identities.

Other interview highlights from Edelen

On if he’s used the IMSV yet: “Oh yeah, I got a beta version and it’s my go-to Bible now. I use it at church and everything. I sit in the back and just roll that puppy out down the aisle during the sermon and get to work. Plus, now that I carry it everywhere I’ve been able to cancel my CrossFit membership. Feel this bicep.”

On if there are plans for a pocket-size version: “Not right now. We’ve been in touch with the Gideons, and there’s some mutual interest, but that’s something we’ll probably let them deal with.”

On the longest connection line he’s ever drawn: “I once drew a line connecting Rahab’s name in Joshua with the genealogy of Jesus in Matthew. Took me two hours. Best two hours of my life.”

Oh phooey, I was hoping this

Oh phooey, I was hoping this was real!

When will this be available ?

When will this be available ?

It actually won't. This is

It actually won't. This is our April Fool's Day post :). Thanks for reading!

I've been leading staff and

I've been leading staff and students through manuscript study in 60 plus nations since 1969 when I caught the disease from Paul Byer. I am excruciatingly excited by this bold launch. However, I'm holding my breath .because I can't discover the translation used. I hope and pray that it is not the New International Version - Paul never allowed us to consult commentaries! That would be a nasty prank on this hallowed day. I'm not fooling around here. But I am shopping around for a bigger briefcase - maybe I can pick one up in Asia on Tuesday or maybe find a knock off North Face backpack. But I do have special skills and aptitude here. ..... Who introduced staff directors to the multi-media EQUIPMENT PACKAGE! ? Yes, of course, It was I! Effective communication demands strong backs and so does serious, very serious, Bible Study. Eric J. Miller, in Nairobi on this premier day of the fourth month!

What a great idea!! PLEASE

What a great idea!! PLEASE print a spanish version. We want to carry the weigth of Scripture. Peace

I see a friends post "IV finally releases manuscript version of the Bible!" And I get SO excited- like I have to go on the page during my lunch break so I can place an order- only to read "continuous length of paper..." *sigh* :'( why would you do that to someone's heart! I still have hope though!!!! *_*

This would be cool if I could

This would be cool if I could get a clay jar to store it in for later use.

By Bob Grahmann
How to Start Reading the Bible

Perhaps you’ve made a New Year’s resolution to start reading your Bible or to read it more often. Great!

By Laura Abrams
Study the Bible Through Lectio Divina

In InterVarsity, we have a central belief that the scriptures in the Bible are God’s Word—and these words speak to us.