Is the Kingdom Coming? | InterVarsity
Skip to main content

Is the Kingdom Coming? 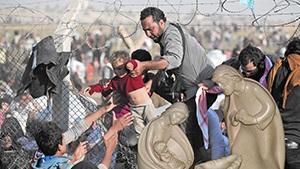 This is the question I’ve been asking over and over again for the past year or so.

Every time another unarmed Black man or woman was killed at the hands of police, every time scenes of a new terrorist attack showed up on the news, every time I saw the faces of Syrian refugees on my computer screen, every time marginalized college students were the victims of racist comments and threats, every time partisanship reared its ugliest head, my heart has asked: Lord, is the kingdom really coming? Because it doesn’t look like it.

Don’t get me wrong. I’m a good pastor’s kid. I’ve read Revelation, the Gospels, the Chronicles of Narnia, and The Lord of the Rings. I know how things end. I also know that Satan is working hard to deceive and confuse and divide and demean. I’ve studied spiritual warfare in Scripture and read The Screwtape Letters. I haven’t been expecting to wake up to unicorns and rainbows every day.

But some days—more and more days—the pain in the world feels like too much. I don’t need Advent this year to help me long for Christ’s second coming. I, and many others I know, am living in a perpetual Advent, waiting and longing with a depth I haven’t experienced previously for Jesus to come back already. We’ve had enough.

The continual onslaught of bad news has made me ask a secondary, closely related question: Is the world actually getting worse? Is there more sin, more pain, today than there was when Jesus was on earth?

At first glance the question might seem ridiculous; obviously, the answer is yes, right? After all, Paul’s description of “terrible times” in the “last days” in 2 Timothy 3 sounds like a pretty accurate description of our world (and particularly this last year during election season):

People will be lovers of themselves, lovers of money, boastful, proud, abusive, disobedient to their parents, ungrateful, unholy, without love, unforgiving, slanderous, without self-control, brutal, not lovers of the good, treacherous, rash, conceited, lovers of pleasure rather than lovers of God.

But these things were also true in Paul’s day, and, even earlier than that, throughout the Old Testament. Genesis 6, where God commands Noah to build an ark, says, “The LORD saw how great the wickedness of the human race had become on the earth and that every inclination of the thoughts of the human heart was only evil all the time.” That is a lot of wickedness.

And consider the sins Israel and Judah committed—not to mention the sins of the surrounding nations—during the times of the prophets: sacrificing children and worshiping idols, raping women at the hands of kings, committing murder, favoring the strong and oppressing the weak. And that’s the very short list. The biblical world, all the way through Scripture, was full of rampant sin and its consequences.

Are things truly worse today? Or do they just seem worse because we see so much more of the evil and pain through social media and the Internet? I suspect we can’t know. And maybe it doesn’t matter to most. But I’ve found, in these hard days, that it does matter to me. Believing things are worse now than they were in Jesus’ day can move me closer to despair, and farther from faith in his ability to overcome our current challenges. It means I see the bad more readily and easily than the good, and that the evil often feels weightier and more real. And it’s been leading me to ask the wrong question about the kingdom.

The Kingdom Is Here

I think the better question is, “Where is the kingdom?”

Simply put, the kingdom was everywhere Jesus’ reign was brought to bear over sin and sickness and unbelief and, ultimately, death. John actually explicitly points out these “kingdom sightings” to his readers in the first part of his Gospel, calling them “signs.” But throughout the rest of his testimony about Jesus, he expects his audience to be able to recognize the signs themselves—and to be changed by the King in the process.

When Jesus came to earth, he demonstrated his own Kingship and gave the humans he loves a much deeper picture of what the kingdom of God is—not a kingdom that comes through violent revolution or political power, but rather one that comes through the Spirit of God at work in hearts and bodies, bringing healing, truth, love, self-sacrifice, humility, justice, kindness, joy.

Signs of the Kingdom Today

So where and when is his kingdom being manifest in the darkness? It’s evident here:

And every time we see and name and highlight these manifestations, we remind ourselves and those around us that Jesus is king, and that the kingdom is here, and coming, and full of life and light.

May Your Kingdom Come

I don’t know what the future holds or how God is working out his sovereignty and justice in our era of violence, hatred, and fear. But here’s what I do know: Jesus deposited himself as an infant in the middle of a similarly volatile culture of hatred and fear. In fact, the initial response to his arrival was more violence, not less, as Herod’s thirst for power led him to call for the killing of every male baby under two in the Bethlehem area. I imagine that the mothers of those dead babies cried out, with anger and weeping: Lord, is the Messiah really coming? Because nothing right now seems to point to it.

But the answer was an emphatic yes. The King is coming, and is, in fact, already here. And no power—not Herod, nor any power to come—can stand against him.

For those of you who, like me, have been asking if the kingdom is coming, and whose Facebook and Twitter feeds are declaring an emphatic no, the answer is still the same as it was for those mothers: Yes, the kingdom is coming. Yes, it is here. And nothing—no corrupt rulers, past, present, or future; no acts of racism or hatred that denigrate the image of God in others; no broken immigration systems; no lack of affordable housing; no Supreme Court decisions—will be able to stand against him in the last day.

Because of that truth, we can ask a different question—Where is the kingdom today?—and then actively look for and experience the answer through God’s work in us and around us. This is our part. To watch for signs of the kingdom, and call them out to each other. To let the Holy Spirit transform us and then make God’s kingdom visible through us as we give testimony, through our words and actions, to the true character of Jesus, the one who came “to proclaim good news to the poor, . . . to proclaim freedom for the prisoners and recovery of sight for the blind, to set the oppressed free, to proclaim the year of the Lord’s favor.”

And to pray as he taught us to pray: “May your kingdom come, and your will be done, on earth as it is in heaven.”

Slow Kingdom Coming
No one said pursuing justice would be easy. How do you stay committed to the journey when God's kingdom can seem so slow in coming?

The Myth of Equality: Uncovering the Roots of Injustice and Privilege

Ken Wytsma, founder of The Justice Conference, unpacks what we need to know to be grounded in conversations about race, privilege, and justice. He helps us understand the origins of these issues and the reconciling role we are called to play as witnesses of the gospel.