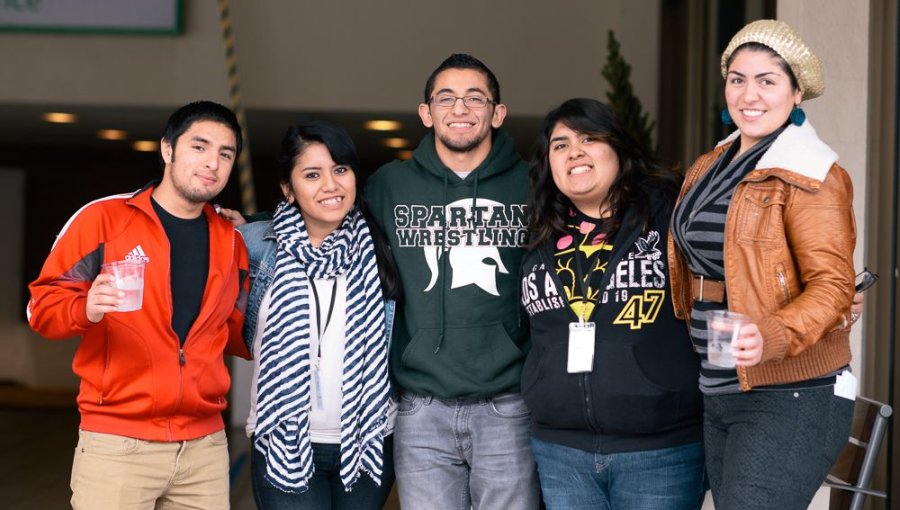 Why have ethnic-specific conferences?

My conviction is that in order for InterVarsity to fulfill its mission of growing in love for God, God’s Word, God’s people of every ethnicity and culture, and God’s purposes for the world, we must create safe spaces for those who have a strong sense of ethnic identity to feel welcomed in this movement and for those whose ethnic identity is not as strong to be affirmed by God in their ethnicity. In other words, to truly be a multiethnic movement, we must cultivate pockets of ethnic-specific groups where people are free to explore their identities in Christ.

That was the goal of Encuentro//2013, a conference put on by LaFe, InterVarsity’s Latino ministry. We were praying for 200, secretly hoping for 250, and blown away when we had around 400 people attend California’s first statewide conference for Latino students. That made it the largest conference to date in the history of LaFe!

We were a mixed group, with

There were Latinos who preferred Spanish, Latinos who preferred English, and several people who preferred both! Speakers and teachers, students and professors shared stories and visions of hope for this new Latino generation. And several non-Latino staff joined us for this epic moment in InterVarsity’s history, symbolizing the partnership with and blessing of the national movement for what they see God doing in California.

Perhaps one of my favorite memories of this weekend was seeing Regional Directors running around carrying ladders, moving tables, and getting a piñata ready, all for the service of the Latino students in their regions.

Encuentro//2013 began as a vision held by pioneer staff worker Javier Tarango-Sho and a handful of others who started noticing the demographic trends shifting more quickly in California than in any other part of the nation.

But as we sat in a room full of special guests of the conference made up of alumni from UC Davis and UC Berkeley, and heard each person share about God breaking their hearts for the Latino students on their campuses, we began to realize that Encuentro//2013 stood on the shoulders of several founders of faith. These alumni were some of the first in their families to attend college—and they did it in the 1970s and 1980s, when university life was not as diverse as it is today. They were blessed by their InterVarsity fellowships but also prayerfully longed for a place of welcome for Latinos like themselves.

Current LaFe staff stand on the shoulders of these praying women and men. We are becoming an answer to their prayers, and the over 300 students who were in attendance are a continuation of those prayers. Many students were able to embrace their ethnic identity, some for the first time. One student commented, “I didn’t realize that God could love me as a Mexican.”

And, just this weekend, 60 participants committed to start a LaFe chapter at their college or university. One alumnus said, “It was a blessing to participate in the conference. . . . I love seeing the vision that staff have! I saw . . . students accept the challenge to lead a chapter—exactly what is needed.”

In addition, 40 people recommitted their life to Jesus, and four people chose to follow Jesus for the first time. One student boldly stood on Sunday morning to testify to her first-time commitment to follow Jesus. With great joy she recalled the overwhelming, beautiful feeling of the Holy Spirit as it filled her with a peace she’d never known before. One life changed, one life significant to God, one life that will make an impact on her campus and change the lives of others now through the power of Jesus.

The Kingdom Is Coming

At one point in the weekend, a fellow staff worker asked me, “Can you believe that this is happening in Fresno?” With my heart full of joy and my eyes full of tears, I thought, Lord, I believe; help my unbelief! Fresno is known as the armpit of California, but God is bringing his beautiful, diverse kingdom even in Fresno, as he showed us this weekend.

Noemi moved with her family from Mexico to the U.S. when she was five and grew up in the Central Coast of California. She serves as the LaFe Specialist for the Surf & Turf Division of InterVarsity, working with Latino students from California's Central Valley, Central Coast, and Las Vegas.

Growing Up Latino in the United States

How You Can Help Latino Students Finish College

The momentum we saw and

The momentum we saw and experienced at Encuentro is indeed a dream that has kept a lot of InterVarsity LaFe alum in prayer! It was such an amazing, overwhelming joy to see the beginning of a wave of Latino students being affirmed in their ethnic identity and being sent forth in the power of Jesus! May it continue to be so, Lord!