Making Evangelistic Waves on the Beach 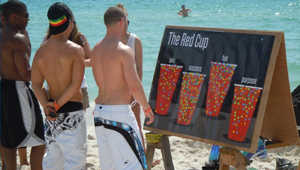 College students’ spring breaks typically include road trips, sunburns and partying on the beach. This year I was part of a team of InterVarsity students and staff that experienced all of those. We participated in Soul Surf, an InterVarsity trip focused on equipping students in evangelism and sending them out to practice on the white sands of Panama City Beach, Florida. The beach was filled with beer pong tables dug into the sand, plenty of skin showing, and a house party atmosphere. This reputation made it a primary spring break destination and the perfect spot for our trip.

We creatively engaged those on the beach by giving away free pancakes, throwing pool parties and even hosting a live band playing at a bar. We used the “The Red Cup” proxé display on spiritual thirsts to connect with the thousands of red cups on the beach. We tried to “go and be” instead of inviting the people to “come and see.”

This approach led to spiritual conversations with people who typically wouldn’t go near a church. We brought Jesus to the same bar that would host MTV’s beach bash of 100 kegs, 500 gallons of mixed drinks, and 1,000 pizzas the next day. This is a scene mostly missed by Christians, and our students reached out within it! This is what incarnational ministry should look like.

When we are weak, God is strong.

One evening, after a long day on the beach, I was asked to set up one more table for the Red Cup display when all I wanted to do was sit down and eat dinner. As I finished, I saw students checking out the display, but nobody was working it yet. It felt like a ringing phone where I kept looking around wondering, “Is anyone going to get that?” God pushed me just a little bit farther, out of my own strength and into his, and I began talking with them.

The conversation unfolded and I learned that two of the students believed in Jesus, but weren't committed to following him daily.  I shared the gospel with them and asked if they would like to make that commitment right then. I was surprised when they said yes! I made sure they knew the implications of following Jesus, almost trying to talk them out of their decision. However, it was clear that the Holy Spirit had been working in their lives and they were ready. They stumbled through heartfelt prayers, and committed to following Jesus! Despite my fatigue, God did things through me that I was incapable of and he is able to get the credit.

God surprised me continually as he transformed InterVarsity students and spring breakers alike. I saw InterVarsity students’ hearts go from cold and disengaged to broken for their peers partying around them.They responded out of compassion and planted seeds of the gospel all over the beach. The change in our students led to transformation in those on the beach. Spring breakers honestly engaged in spiritual discussions—some even made life changing decisions!

Those transformations didn’t stay on the beach. My students felt empowered not only to do evangelism as we returned to campus, but to lead others to do evangelism as well. One student started a conversation with four girls on campus using a pocket version of the Red Cup proxé. Eventually, she shared the gospel with them! Now she is bringing other students with her to teach them how to do the same.

Soul Surf started waves of evangelism that will spread to campuses across the U.S. through the lives of new Christians and people willing to be missional leaders. As I watch God’s Spirit move, I can’t wait to do it again next year!

Mike Zientara is a Campus Staff Member at Illinois State University and an InterVarsity alum from the University of Illinois at Urbana-Champaign where he graduated with a degree in News-Editorial Journalism. He blogs at Mike's Ministry Moments.