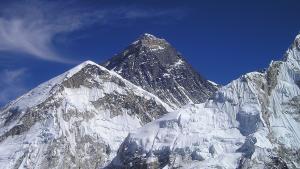 While I was in college my InterVarsity staff worker led a small group through a six-week course about understanding money and its role in our life and faith. I remember writing down everything I owned on a sheet of paper and then signing it over to God. My list of dresser, bed, clothes, car, computer, and books looked short. I could have listed my clothes by item: red sweater, blue V-neck T-shirt, light blue V-neck T-shirt. But that wasn’t the point. Then we wrote down our bank account balance, our paycheck amounts for the last six pay periods, the amount of money our parents gave us, and our major. My short list was getting longer.

The basic foundation that this exercise laid down was that everything I have does not belong to me, but it is in fact God’s. “The earth is the Lord’s, and everything in it, the world, and all who live in it; for he founded it on the seas and established it on the waters” (Psalm 24:1-2). In Deuteronomy 8 it says, “For the Lord your God is bringing you into a good land, a land with streams and pools of water, with springs flowing in the valleys and hills . . . where . . . you will lack nothing . . . remember the LORD our God, it is he who gives you the ability to produce wealth.” In 1 Corinthians 4:7 Paul asks, “What do you have that you did not receive?” With that in mind, we took our list and began thanking God for all of it.

To be honest, considering which of my possessions are really mine versus God’s is kind of weird. This was the kind of thing that freaked my parents out and made them think I had joined a cult. And when you think about it, it’s pretty countercultural. We live in a culture that expects you to raise yourself up by your bootstraps. You work hard for what you have, and if you work hard enough you will achieve the American dream.

As graduation drew near and as many friends started looking for jobs, much of our conversations focused on money. Numbers like $25,000, $35,000, and $50,000 were being tossed around. But we weren’t referring to our salary offers from prospective jobs; these were the amounts of loans and debt we would have to pay back after graduation. When I graduated from college in December of 2001, I had a little over $15,000 in student loans and credit card debt. According to creditcards.com, a website dedicated to bringing you the best the credit card the world has to offer, 76 percent of current undergraduates have credit cards, and the average undergrad carries $2,200 in credit card balances as well as accruing an average of $20,000 in additional college debt (as of 2008). Graduation, for me, was a two-sided coin. On one side was the excitement of a new prospect, with the true independence of a salary and regular income setting me free to go about life the way I wanted to live. Tempering this newfound freedom, however, was the letter that arrived five months after graduation—explaining what my payment options were to be debt-free in 20 years. Not to mention the pesky credit card minimum payments and an upcoming marriage.

Can I go on a rabbit trail here? There is one piece of advice I was given which I pass on to all of you who are single or engaged: Don’t get married until you have revealed to each other the exact amount of debt you have, to the penny. By doing this, you will be free from what can feel like a terrible secret and burden. Anyway, that’s what I did. I told my husband-to-be how much debt I had in loans and on my credit card. It was a wise move.

After getting married we hunkered down. We were both raised with the idea that having debt was not a good thing. In Deuteronomy 15:1, God lays out a plan for lenders. “Every seven years you must cancel debts.” Lenders are not to be hardhearted or tightfisted; “rather be openhanded and lend them whatever they need” (v. 8). God did not intend for us to carry long-term debt. And he did not intend for lenders to have power over their benefactors. But, unfortunately, that’s not the world we live in. So my husband and I decided to be serious about attacking our debt and began sending almost half of our pay to our lenders. We were able to pay off all our debt in less than a year. And we did this while living on a combined salary that was less than the national average of $43,318 a year.

In the process of paying off our debt we learned to live on so much less than what we thought we needed. We chose to make sacrifices such as eating peanut butter and jelly sandwiches and rice and beans for a while. And while I wish there was a magic formula I could give that could erase debt easily, there’s not. It really does come down to sacrifice and living within your means. It’s not easy, but it is worth it.

When we paid off our debt, we realized fully how much of our money was tied up in debt, keeping us from better serving God’s kingdom. When we finished paying off our academic and consumer debt we had all this money! And while it was tempting to begin using that freed-up cash to start buying new toys, we instead chose to continue living a simpler lifestyle in order to use that money to advance God’s kingdom. Let me emphasize that money you owe creditors is money that is tied up in ways God may not have intended.

While school loans and credit card debt may seem daunting, let me encourage you that it is possible to eliminate debt and live a life debt-free. It all begins with how we choose to view our possessions and then learning to be content with what we are given. My husband and I continue to live debt-free. We recently bought a condo, which has started a whole new conversation about how to use our resources to advance God’s kingdom on earth. And I know that these types of conversations will continue to pop up in our lives. But we will continue to integrate what we know of God’s character and Word into our lives.

Helyn was born in Caracas, Venezuela, and grew up in Miami, Florida. She moved to Madison, Wisconsin, to intern with the Urbana worship team. She received a B.A.