No, Canada: Why Christians Stay Put When Politics Fail 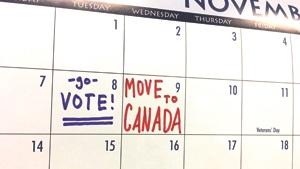 Oh, elections. They do bring out our rhetorical best, don’t they? Surely you’ve heard (or maybe thought) this recently: “Well, if Candidate X wins this election, I’m moving to Canada!” Maybe it was a close friend, or relative, or neighbor who said it. Perhaps it was Alec Baldwin, who was the first person I heard say it. In any case, it’s a threat that has gained remarkable traction in modern political discourse.

At the start, let’s apologize to our friends in the Great White North, for surely this sentiment does not accord their wonderful country its proper esteem. Canada deserves better than to be Option B if our own country, careening along on the skateboard of Electoral Politics, face-plants directly into the curb of Oops, Democracy. This is not the movie Some Kind of Wonderful, and Canada is not that girl with the boy haircut and drumming skills. Let’s show some respect.

Moreover, it takes a certain amount of egotism to assume that Canada would even want whichever dissatisfied Americans decide to take their talents north. Underneath the phrase “If this election goes south, I’m moving to Canada!” is a subtext of “Why wouldn’t they want me? I’m an American—I’m a catch!” If the queasy arrogance in that statement isn’t immediately obvious, imagine being approached for a date by someone with a similar attitude. Canada might feel like swiping left on that, and who can blame them?

For Christians, as silly as thinking too deeply about a bon mot like “Election fail, peace out!” might seem, it actually nods in the direction of a timely question: What should we do if our country starts looking a little, well . . . wobbly?

I won’t make you wait in suspense for the answer. When nations fail, just as when nations thrive, Christians stay put. For example, witness the life of the Old Testament prophet Jeremiah.

The book of Jeremiah is basically a snapshot of a nation self-destructing. Things start well, with King Josiah rediscovering the Book of the Law and restoring Judah’s worship of YHWH after a long period of rebellion. Soon, though, Judah relapses into their old habits of idol worship and paganism. Jeremiah pleads for repentance, but the people ignore him, and lying prophets contradict him.

Later, the Babylonian Empire conquers Jerusalem and torches the temple of the Lord, exiling all but a remnant of the Judeans to Babylon. This remnant eventually stages a botched coup and then abandons Jerusalem altogether for the safety of Egypt. It’s quite a book.

It's also quite a scene.  Try to imagine the Jerusalem of Jeremiah’s day: a thin veneer of God-obedience covers over a plague of God-forgetting. People worship YHWH in the temple, then go down the street to pay homage to Baal. Greedy priests and fork-tongued prophets speak lies of prosperity and success in the ears of the public. King after king takes the throne, each less interested in God than the last. The streets swirl with foolishness, disobedience, and ignorance. The city is cracking, slowly but steadily.

If you’re Jeremiah in that situation, what do you do? Judah is a small country in a big land—there are lots of places you can go to hide, wait out an imminent collapse, live comfortably while your home implodes. This is your only life, after all. Why waste it on a people determined to fall apart, on a place determined to wreck itself? Why not just leave?

Jeremiah could have done that. Instead, he did this: he stayed.

He stayed through public scorn, physical abuse, and an attempt on his life. He stayed through multiple kings, a foreign takeover, and exile. Despite the mounting psychological and spiritual toll, in the face of constant cultural pressure and with no results to show for it, Jeremiah never wavered. He proclaimed God’s word and encouraged God’s ways—year, after year, after year.

In this dispiriting election year, what can Jeremiah’s life teach us about the value of staying put?

1. Staying is the best way to love our nation.

Jeremiah, however, knew that the most important thing for Judah was not its material success, but its spiritual faithfulness. And he knew that for the nation to be spiritually faithful, it first had to make God its top priority. Every other concern had to come second.

And so Jeremiah went about the hard work of real patriotism. He loved his country and stayed with his people, continuously exhorting them to live at nothing less than God’s best, with God coming first and Judah second.

Every nation’s ultimate good is for its citizens to follow Christ as Savior and Lord. The fruits of the Spirit are far better indicators of a country’s health than its GDP or unemployment rate. No nation, no culture, achieves its very best while its people love other things more than God—even, or perhaps especially, the nation or culture itself.

2. Staying is the best way to love our neighbor.

Jeremiah could have lived as an outsider if he had chosen to. Seeing the unpopularity of his obedient life, he could have retreated to a pouting existence outside the city walls, dropping in only to rebuke his countrymen. But he didn’t. All his life, Jeremiah shared the daily lives of his people. He walked the same streets, shopped at the same markets, worshiped in the same temple. His public ministry was inseparable from his everyday life.

For Jeremiah, these were not just God's people- they were his people, and their individual wellbeing mattered to him.  The idea of trading this group of neighbors for another group somewhere else would have been unthinkable.

When we as Christians flee our embeddedness, escaping from our local situations for greener pastures when all is not perfectly well, so much is lost. We lose the chance to shepherd our fellow citizens through hard times. We lose the chance to embrace our mission field- whenever a Christian leaves, a mission field stays behind, one to which someone else will eventually have to go to take their place.

Most importantly, we lose the chance to publicly model with our lives an important truth: this life is not about what’s best for us; it’s about what’s best for God’s kingdom. Losing these chances is significant. How much greater does God’s glory shine if we seize them instead and live them out to the fullest degree we can?

God has designed our world to function best when virtue abounds. By staying and living faithfully, selflessly, sacrificially—all the virtues that God has designed us to manifest—Christians create pockets of human flourishing that bestow life and vitality to our home countries, and our neighbors who live there.

Our love for something is in direct proportion to our willingness to remain with it under dire circumstances. As Christians, what will we do when our own countries, our own cultures, seem to take a turn for the self-destructive? Will we leave at the first sign of trouble? Or will we remain, as Jeremiah did, to be speakers and doers of God’s truth among sin-poisoned people and sin-damaged countries?

When God’s creation was sin-damaged and sin-weakened, he redeemed it instead of abandoning it. When God’s people were sin-poisoned, he ran toward us instead of running away. Jeremiah embodied this dual posture toward nation and neighbor among his countrymen in Judah. As for our homes, even in difficult elections, God would have us do the same.

By Matt Meyer
A How-to Survival Guide for Election Season

No matter how you’re feeling about the election, this particular time in the life of our country provides a unique opportunity to be faithful witnesses to Jesus.

​As followers of Jesus, voting, while important, isn't the last act, or the only way to participate. We're called to a broader, even more powerful, ongoing action with regard to our national leaders: we're called to pray.

Impossible People
The church in the West is at a critical moment, facing militant assaults from aggressive secularism and radical Islam.
Login