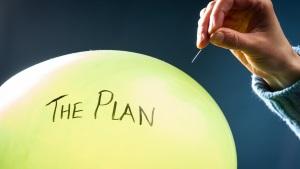 I like a plan. My dad has always encouraged me to have a five-year plan for myself, and then to work it. Take control of your life. Make choices that get you where you want to be, he says.

This has served me well in leadership and in making personal life choices. A plan keeps me on an intentional path that will help me achieve my goals. A plan takes the guesswork out of what seems to be an unpredictable world. A plan gives me a sense of security.

But what happens when the plan is delayed or the timing is thrown off due to unforeseen circumstances?

Rarely does life happen according to the plans we make. Even plans with the best intentions are subject to a different timing than ours: God’s timing. Often I’m so captivated with my goals and caught up in getting from point A to point B that I forget about the journey God may have for me in the process. He seems to enjoy interrupting my plans in order to help me see the bigger picture of what he’s doing, not only in my heart but also in the world around me.

God has been interrupting people’s plans for centuries. In this Advent and Christmas season, Mary and Joseph particularly come to mind. They had a plan. Having been raised in good Jewish homes, they had followed God’s commands and were respected in their community. Now they were engaged, ready to take the next step and commit their lives to one another.

They had done things right. And their plan seemed logical. It seemed like a plan that God would be good with. But God interrupted.

Mary found out she was pregnant with Jesus—before she and Joseph got married. I can only imagine the chaos this brought on in their families as they found out their sweet, Jewish, God-fearing daughter/daughter-to-be was pregnant! Especially when she insisted on sticking to her story that God had done it and that she truly had kept her commitment to purity before marriage.

If I were Mary, I would have been thinking, “God, couldn’t we have done this after I got married? It would have spared us all a lot of hurt and turmoil. Or just pick someone else altogether—someone already married, who’s older and wiser. This wasn’t part of my plan!”

God’s timing doesn’t always mean that we’ll have happiness and smooth sailing. Often it eventually brings joy, but there may be suffering in the receiving of it. It can be hard to give up control. It’s unsettling to have your security shaken.

God had a bigger plan for healing and salvation to come to the world through his Son, Jesus Christ, so he chose to mess with the timing of Mary and Joseph’s plan, no matter how crazy it seemed to everyone else. There is no way they could have known how magnificent this kink in the plan was going to be for coming generations and literally all of eternity.

I’m challenged by the story of Mary and Joseph. It causes me to evaluate my own faith and ability to trust God when his timing doesn’t coincide with mine—which has happened many times in my life. I thought I had landed my dream job when I graduated from college, but instead it resulted in depression and anxiety. Several of my dating relationships in past years broke up just in time for the holiday season, causing intense feelings of pain and loneliness. My aunt recently passed away days before I directed our student conference, bringing on deep grief and exhaustion. In situations like these, I question God’s timing and wonder what he’s up to.

But when I choose to be in the silence and patience of waiting on God’s voice, he mercifully reveals to me some of his “madness.” The skills he developed in me while I worked in that difficult job were the same skills I would need, in greater ways, as he launched me into a new, life-giving career which I still love to this day. The amazing friends God placed in my life during those painful days of breaking up helped point me toward deeper healing in Christ, which has allowed me to currently experience one of my best dating relationships ever.

And if I dare to be very still, I can reflect on God’s timing of my aunt’s death and the student conference. In the midst of the sorrow, I experienced abundant grace as I relied on God’s strength for my heart and witnessed my colleagues leading the conference in tremendous ways—ways that facilitated transformation in students’ lives for Christ. As a result, I know God and my team in a more profound way.

Yes, I still like a plan, and I will always long for the security that comes with my plan. But perhaps the security I’m really longing for can only come through the timing and plans of a loving, trustworthy God. A God who has vision to continue growing my heart for him, his people, and his kingdom . . . in his good timing.

If You Don't Get an Angel