Reformation Day: What It Is and Why It Matters | InterVarsity
Skip to main content

Reformation Day: What It Is and Why It Matters 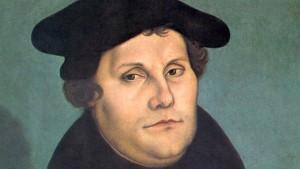 University campuses have always been dangerous places. You never know where you might end up should you dare set foot on one. I doubt that Martin Luther had any inkling that one day his exercise of academic freedom (commingled with spiritual anguish) in the ancient university town of Wittenberg would set in motion a renewal movement that would change the church forever—both in its Protestant and Roman Catholic expressions.

Almost 500 years ago, Luther strode up to a large wooden door. Paused. Then unfurled a hand-written scroll. With a few swift strokes of a hammer, the nail bit into the door’s wood. There the scroll hung, curled slightly by the breeze.

It was a young professor’s invitation to seriously and publicly discuss a medieval Catholic doctrine that was tearing apart the fiber of his soul: salvation. What is repentance? How are we made right with God? What role does the church and, more specifically, the Pope play in granting the forgiveness of sins?

It was October 31, 1517—the beginning (if it could be called that) of what we today refer to as the Protestant Reformation. Many churches celebrate Luther’s bold action today (known too as All Hallows Eve or Halloween, of course). But it’s also fitting that Reformation Day falls right before All Saints’ Day (November 1), given that the Reformation emphasized, among other things, broadening ministry to those outside of ordered ministry (bishops, priests, or deacons) and religious vocations (those who belonged to a monastic order, as Luther himself did).

Luther’s grievance flowed from the internal tension between his lived experience of being a Christian, his ministry as an Augustinian priest and preacher at Wittenberg, and his role as a teacher of theology in the divinity faculty. As a priest and professor, Luther was obliged to believe and teach the (medieval) Church’s doctrine of “progressive” salvation (soteriology)—the idea that salvation takes root in the life of the believer through seven sacraments, which dispense grace to Christians so that they can be saved over time. The sacraments were baptism, confirmation, the Eucharist, marriage or ordination to Holy Orders, confession, responsive penance, and, in the end, administration of the Last Rites that aid in the transition from this life to the next.

This foundational medieval Catholic theology was problematic for Luther for two principal reasons. First, Luther faithfully participated in the sacramental life of the church and yet found that his soul was still anguished concerning his own salvation. As long as salvation equaled moral perfection, he lived in utter defeat, turning from his sin only to eventually fall once more into transgression of God’s law. And he feared the “righteousness of God” (Romans 1:17), which he understood as God’s holiness, purity, other-ness, unity, and perfection. Indeed, to Luther, the righteousness of God was the basis of God’s wrath toward sinners.

Second, Luther came to believe that the church had misunderstood the what and when of salvation. As he prepared lectures on Paul’s letter to the Romans, Luther discovered that what he—along with the rest of medieval Catholicism—had read as “the righteousness of God” could also mean “the righteousness from God.” This changed the meaning of the verse altogether: “For in it [the gospel] the righteousness from God is revealed from faith for faith, as it is written: ‘The righteous shall live by faith.’” In this interpretation, God’s righteousness becomes the gift of right-standing before him on the basis of his gift of faith to the believer.

Luther came to experience peace with God only as he grasped that he was at once both a sinner and justified (given right standing before God) on the basis of faith in the gospel alone (simul justus et peccator). This means our relationship with God cannot be altered by performance. It can only be altered by God’s declaration, like that of a judge, that we are not guilty by virtue of Christ’s sacrifice. And the result of this making-right is reconciliation with God and the bestowal of the Holy Spirit, whose inward ministry causes us to grow in holiness (sanctification).

Why We Should Celebrate

On Reformation Day we celebrate how God worked through a troubled young academic theologian in the context of a university. Through Martin Luther—and others—God altered the course of Christian history, returning it to a more authentically scriptural understanding of salvation.

As with Luther, this is no merely academic exercise. How we understand salvation affects how we experience salvation and life as a follower of Christ. If sinner and saint cannot exist in a single person then we are all doomed to a life committed to placating God by fulfilling his law, a task possible only for Jesus. It is a profoundly liberating experience to realize, as Luther did, that God’s righteousness is given to us and we are declared “not guilty” because of Christ, even as we experience life day-to-day as a people who still sin. The reckoning has been made and now we follow Christ, trusting that he will transform us to be more like him.

Jeff Gissing is Graduate & Faculty Ministries Area Director for the Blue Ridge area. An ordained Presbyterian minister, he lives with his wife, Anna, and two kids in Winston-Salem, North Carolina. He discusses gospel and culture, missional theology, and reformed spirituality at jeffgissing.com.

For more on Martin Luther, check out these resources from InterVarsity Press:

Kneeling with Giants: Learning to Pray with History’s Best Teachers

A Traveler’s Guide to the Kingdom: Journeying Through the Christian Life