The Secret to Incarnational Ministry | InterVarsity
Skip to main content

The Secret to Incarnational Ministry 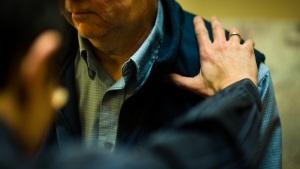 I met my good friend P’Fon on my first day in Bangkok for a Global Urban Trek last summer. She’s an amazing character, always full of energy, joyfully dancing to Thai worship songs with a huge smile on her face.

At the same time, P’Fon is able to empathize with her fellow church members, praying with them and holding their hand when they hurt, crying with them when they’re sad. And there is plenty of pain in their slum community. P’Fon is specifically in charge of a ministry to people affected by leprosy (PALS)—people who no longer have the contagious effects of the disease but still suffer from disabilities as a result of it.

One day I asked her how she does it: “P’Fon, how do you never get tired?” She smiled at me kindly, then looked up toward the sky. “It’s all from Jesus,” she said. “Thank God that he helps me.”

I had heard others give that response before—and even said it myself—but this time it was completely free of the false humility that often accompanies it. P’Fon genuinely relies on God to get her through the day, to dictate her schedule, to provide her salary.

She relies on God in a way that I have never even fathomed.

The Cost of Following Jesus

Somehow, P’Fon seems to realize the cost of what it means to follow Jesus as mentioned in Luke 9:

As they were walking along the road, a man said to him, “I will follow you wherever you go.”

Jesus replied, “Foxes have dens and birds have nests, but the Son of Man has no place to lay his head.”

But he replied, “Lord, first let me go and bury my father.”

Jesus said to him, “Let the dead bury their own dead, but you go and proclaim the kingdom of God.”

Still another said, “I will follow you, Lord; but first let me go back and say goodbye to my family.”

Jesus replied, “No one who puts a hand to the plow and looks back is fit for service in the kingdom of God.”

She knows that, in following Jesus, she will be tired (“Foxes have dens and birds have nests, but the Son of Man has no place to lay his head”), she will have to leave her family behind (“Let the dead bury their own dead, but you go and proclaim the kingdom of God”), and she will have to stay focused on the mission of the kingdom of God (“No one who puts a hand to the plow and looks back is fit for service in the kingdom of God”). She accepts Jesus’ command to keep her eyes on him. And she understands that we cannot will ourselves to be fully present to others. Rather, it is only through complete reliance on God—trusting that the cost of following him is worth it and that he will provide—that we can really minister incarnationally to others.

Following Jesus Where I Am

In Thailand, my trip director gave each member of our team a ring to signify the promise that we all made to follow Jesus, and to remind us to be present to those around us and trust that the cost of following Jesus is worth it. Oddly enough, P’Fon herself wears a silver ring. So it also reminds me of her—her faith, her patience, her joyful obedience. And whenever it catches my eye, I know in Bangkok she is still serving, enthusiastically clapping to a song or holding the hands of one of her sweet friends.

Michael is a third-year student at the University of California, San Diego, studying international studies/political science. He recently returned to the U.S. after spending a semester abroad studying at National Taiwan University in Taipei, Taiwan, where he participated in Taiwan’s IFES movement, Campus Evangelical Fellowship.

To find out more about Global Urban Treks, watch the video!

Blog Categories:
Spiritual Formation
Your Place in the Church