A Short Guide to the Value of Retreat 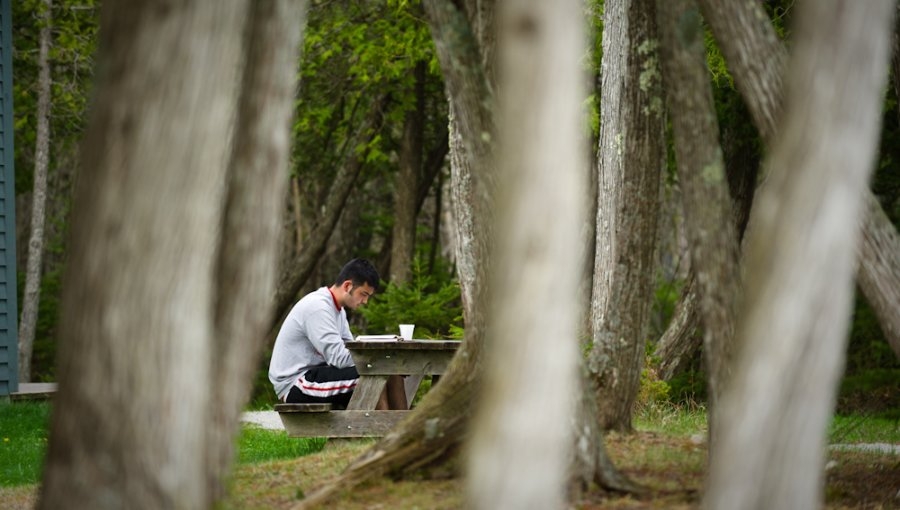 Imagine a place where

- there are record-high levels of depression and anxiety

- one in ten doctor visits are related to exhaustion

Doesn’t sound like a very healthy locale, right? You’re probably picturing something like a Third World country, a super sweet sixteen birthday party, or a mad game of Monopoly. Wherever it is, you probably wouldn’t want to stay.

But what if you had to stay—for, say, four years? That might be a tall order. But that place of exhaustion, elevated stress and anxiety, and record levels of depression, isn’t the Jurassic Park island.

One of the counterintuitive ways that InterVarsity works on campus is by getting students and faculty off campus. We do that through one of the gems of our ministry family—our retreat centers. Since the mid 1950s, InterVarsity has operated three retreat and training centers in secluded places across the U.S.: Campus by the Sea, Cedar Campus, and Toah Nipi. At these retreat centers, students can “come away, meet God, and be renewed.” They were founded on the premise that something spiritually vital happens during intentional time spent away from campus on retreat.

When we talk about retreat, what do we mean?  I want to distinguish between retreat and another word that we sometimes use interchangeably—Sabbath—by explaining their points of emphasis.  Sabbath refers primarily to resting from labor and enjoying both the result of that labor and the refreshment that comes from a work-free time.  Retreat, while also potentially being a time of great rest and refreshment, is the active relocation from our ordinary environment for the purpose of practicing being more attentive to God(definition courtesy of Jerry Webber). The distinction is in the purpose: Sabbath for rest, retreat for proactively connecting with God.

I like this definition of retreat because it rescues the word from a purely passive, reactive sense of itself.  The word typically conjures up a visual of falling back under duress, or meekly removing oneself from the world because of attack. Our above definition puts some steel back into the idea of retreat; it grafts a little more backbone into it. Retreat may have a reactive component—we might only realize we need retreat after something has triggered our awareness of it—but it’s also a proactive move in the way it adjusts us both horizontally and vertically: we proactively move ourselves physically from one place to another, and we proactively adjust our focus Godward.

Seriously, the Pine Thing—I Swell Up.

I hear you asking, Isn’t it enough to practice our Christian walk surrounded by the comfort of things we value, like guaranteed Wi-Fi, and without the fear of being attacked by wolves in the middle of the forest?

It is, in the sense that nothing bad is going to happen if you never go on retreat, not even once. You’re still saved. You’re still going to heaven. I’ve rarely seen a pack of wolves at my local Target, and when I have they’ve been fronted by cashiers hassling them to sign up for a rewards card.

While acknowledging this, it’s still worthwhile to mention that semi-regular retreats are part of a healthy Christian walk.

Our first clue as to the value of retreat is that Jesus did it. All through the Gospels, Jesus models this kind of spiritual rhythm for us. Much of his ministry life is spent engaged in a withdraw-engage dynamic. In the Gospel of Mark alone—the shortest Gospel—there are at least five references to Jesus’ intentional withdrawal to quiet places for the purpose of connecting with God (Mark 1; 3; 6; 9; 14). If part of Jesus’ model for relating to God involved regularly shifting his location for the purpose of praying and connecting with his Father, we would be wise to notice that and incorporate it into our lives.

Further clues appear in Luke 5, another “retreat” passage which follows shortly after Jesus calls his first disciples and begins his healing ministry.

But despite Jesus’ instructions, reports of his power spread even faster, and vast crowds came to hear him preach and to be healed of their diseases. But Jesus often withdrew to the wilderness for prayer.

(I say this while also acknowledging that this subject is much too large to tackle comprehensively in just a blog post. But then, I believe that about 100 percent of all subjects. Man, I hate the Internet.)

I want to point out a couple of things here that I think flesh out our understanding of why we retreat.

1) Retreat centers us as a people of God.

We have a tendency to think of the era that we live in now as being faster and more complicated than any other time. Avalanches of new technology and connectivity lead us to assume that our time period is unique, that our struggles are exceptional. The way we feel as people of God in our culture seems so alien compared to cultures before us.

But the reality is that some parts of culture don’t change:  “reports of his power spread even faster, and vast crowds came.” This was 2,000 years ago, and though the mechanics have changed, the same dynamic is still in play. News of some amazing new person, some amazing new thing, goes out into the world and reaches our ears. This happens all the time for us, probably a dozen or more times a day—what’s new, what’s hip, the freshest teaching, the latest technological innovation that’s going to make some part of our lives better, etc.  Our attentions are always being, and have always been, ferried from one focus to the next, siphoned from here to there, moving from new to new, next thing to next thing.

Retreat grounds us firmly among our brothers and sisters, both now and ages past, whose temperaments and foibles don’t change. They were a distractible people. We are a distractible people. Retreat, therefore, is neither an antiquated practice nor a recent theological necessity.  It roots us between the invariable nature of culture and the unchanging responses of God’s people everywhere.

2) Retreat is a subversive activity.

Jesus, by retreating, subverts our assumptions about what, practically, is called for in specific situations. The crowd comes to Jesus for two reasons—words  and work. Jews needed to hear the gospel and sick people needed healing. We’d assume that the most important things would be to meet as many of the needs as possible and to get the message in the most ears possible. Everything that we would associate with a special movement of God—numbers, notoriety, miracles—is happening here, so wouldn’t it make sense to press into the blessing, to really maximize it by staying active constantly? It’s a little bit of a wasteful move; by “often withdrawing” Jesus is leaving opportunities on the table. His fame could be growing. More work could be accomplished. Time management could be better here. But Jesus repudiates that by “often retreating.” He is saying no to apparent opportunities for good actions and yes to intentional time to connect with God.

I’m not sure it really matters what Jesus is saying no to here though (in this case, greater celebrity and more religious work). Let’s not get lost feeling condemned for pride and workaholism, or for not praying hard enough or often enough. Instead, I want us to simply see a wonderful hierarchy:  in retreat, worship proactively trumps everything.

Retreat allows us to build into our lives moments where we emulate Jesus by reasserting our priorities. Those chances can be rare. Most of our decisions race by us without us noticing, and in the process, our priorities sometimes shift in the same way. Retreat lets us plan for, and build into our lives a spiritual win:  the purposeful toppling over of whatever hierarchy we have accidentally created thanks to our attention-grabbing surroundings and the subjugation of  them to Jesus. We’re telling the world, ourselves, and God that whatever else is going on can wait.

Drew Larson serves on the editorial and development team at InterVarsity. He blogs at www.casualfootballer.wordpress.com and recently self-published Posterized, a collection of essays on sports, comedy and Jesus.