Surviving in a Volatile Economy | InterVarsity
Skip to main content

Surviving in a Volatile Economy 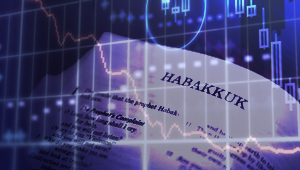 As I helplessly watched the market go up and down this summer, I thought a lot about my old friend Habby. He died 2,500 years ago, penniless as far as I know. Anyone who remembers him knows how angry he was – really angry at God because, from his perspective, God was to blame for the economic mess in his world. He thought God should do something about unfairness and violence. But it is not his anger that comes to mind this week; it is his final words. He ended with peace and joy, and that is what I want for living in these days.

I spent a decade having some kind of conversation with Habby every day and it changed my life. We both struggled with the economic, political, and social issues around us. We both prayed a lot. Habby heard from God in very clear ways. I heard from God through Habby and I know I’m not the only one he influenced. The apostle Paul quotes him near the beginning of Romans. “The righteous will live by faith,” (Romans 1:17) comes from Habakkuk 2:4.

When Habby heard those words from God, it was the beginning of a 180 degree shift in his attitude. His journey was not an easy one. What he came to see left him so scared that his knees knocked and his lips quivered – his words, not mine. And yet, at the same time, he could rejoice in the Lord and exalt in the God of his salvation. God really was his strength.

Some of my experience is similar. When I read, “Will not your creditors suddenly rise… you will be booty for them,” (Hab 2:7) it makes me tremble. Words like “the violence done to [the forests of] Lebanon will overwhelm you; the destruction of the animals will terrify you,” make me scared of God’s judgment on our culture. Habakkuk was not excited about the judgment either, but he figured out that God’s action was way better than evil and injustice running unrestrained. He began to long for God’s work even though he understood how disruptive that could be – read the 3rd chapter of Habakkuk.

I want peace and joy in my life these days. Habby reminds me that the way to get there is by living in faith and trusting in God. It is his world. He is in charge and he is paying attention.

Scott Wilson is the Communications Director and Associate Director of Advancement for InterVarsity.