What Story Are We Telling? | InterVarsity
Skip to main content

What Story Are We Telling? 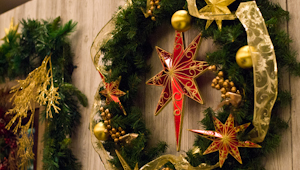 Consider the story we sing about at Christmas, depicted by snow, roasted chestnuts, big red bows, and the smell of pine needles. That story is a lot of fun, but, unfortunately, even the best parts of that Christmas story have a scandalous side, such as cheap goods produced by underpaid laborers half-way around the world and post-holiday debt. Charity increases at Christmas, but the poor in our country still go with needs unmet. Some are hungry, while others make resolutions to shed added pounds after the season.

There are plenty of contradictions in this Christmas story, and these questions of consumerism, fair wages, economic disparity, justice, and environmentalism all matter. I work with a population of young people who know these questions matter. Students are looking for a story with solutions, and they reject stories that fall short. As a result, many place Christianity on the chopping block, believing Christmas is nothing more than a fun time without any relevance for pressing world issues.

So here’s the question: Is the Christian story inadequate for addressing these real world problems or has it simply been told incorrectly?

I vote for the latter and here’s why.

Jesus’s birth is the story of how God came into our messy world as a baby. This mystery is consistent with Jesus’s life and ministry since he told his followers in Matthew 25:44-45 that the sick, the poor, the prisoners, and the young are one with him. And, remember the little children in Matthew 19:14? Jesus consistently aligned himself with the weak.

Surprise! Jesus’s birth informs us that we are supposed to reorient our lives around a helpless and vulnerable baby. He didn’t come as the king people wanted. Otherwise, we might misread that you have to be rich, wise, or powerful to be in his crowd.

Instead, he came quietly, into a barn. Now this is a story to shape us.

Jesus lived a story where the least is greatest, and the greatest least—where the people who needed help got help without any bureaucratic red tape. In Matthew 20:28, Jesus told it straight to the honor-hungry disciples, “…The Son of Man did not come to be served, but to serve.”

Sadly, Christians are known for welcoming baby Jesus without welcoming the poor or the stranger. It seems we have missed the point. We have conveniently ignored the crucial fact that Jesus is the poor, the weak, and the stranger.

Christians, is this the story we are living out?

I’m convinced that the good news students want to hear at my campus is found in the manger. It’s hard to see because the story has been done wrong. I’m glad students reject the stories that don’t make a difference in the world, but I commend to all of us another look at this one. Imagine a reality shaped by embracing a vulnerable baby in a manger.

Lisa Liou has served on staff with InterVarsity Christian Fellowship for more than nine years on campuses in Michigan, Illinois, and California.

Lisa you miss the mark, but

Lisa you miss the mark, but nice try. The Christian organizations around the world serve more indigent people than all other organizations combined...including "government". It has always puzzled me why we Christians choose not to celebrate and write about the kind and generouse nature of the"Christian" and instead we read countless stories about how we have failed our fellow man and Christians. I suggest writing more about the wonderful Christian acts of charity and this will promote even more Christian acts of charity! The Christians I know are known for welcoming baby Jesus, the poor and the stranger. I suppose it can be said, the good acts of Christian kindness and charity go unnoticed, but then, I know Our Lord notices! Now the secular co-op of Christmas does present a delema for we Christians as Jesus entered the world in poverty to teach the lesson of detachment from earthly things and in this I agree.

I'm glad that you know

I'm glad that you know Christians who embody the call of Jesus to serve the least. I personally know many as well. Our experience impacts a lot of how we think about these issues. One point in the article is that many college students believe Christianity is not known for these things, and if they have not experienced it themselves, perhaps this means that the practice is actually not as wide-spread amongst Christians as we would like to believe. If I were writing solely to those who do embrace Jesus's call to the weak, then I would have written the article differently. However, the intent was to contextualize a message for those who have not yet encountered, probably due to many other confusing messages about Christmas and Christianity, the Christian invitation to love the weak. Thanks for your thoughts. -Lisa