When to Say Yes: Relationship Advice for Women | InterVarsity
Skip to main content 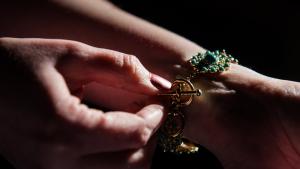 It feels like eons ago (13 years) that I was dating, and honestly, I don’t look back fondly on that time—the tribulations of crushes and attempting to read men’s minds, the wasted conversational hours obsessing over who likes whom.

When I take a deeper, intentional look back on my dating years, though, I see that they also held some of the best moments of my life: The thrill and giggles after delivering a big no to my T.A. (eight years my senior) who asked if I’d date him. The freedom when my single friends and I could honestly say we were totally content being single. The first time I skipped down a sidewalk at night holding my future husband’s hand. The joy of piecing together all the ways God planned and brought to pass my meeting with the guy I came to marry.

Here are two simple lessons I learned along the way.

1. Your brain is spaghetti; his is a stack of boxes.

I’ve heard this kind of analogy so many times I can’t cite its source. Women’s brains like to race every which way, reveling in connections and overlapping threads. Men, on the other hand, like to stay in one box at a time—the “eating box,” the “driving box,” the “homework box,” the “Netflix box.”

Obviously these are overgeneralizations. Men and women each have individualized brains and ways of sorting information. But for many women who are getting to know a guy at a deeper level for the first time, differences in brain-workings are a huge cause for frustration.

Imagine this: Woman feels the weight of numberless concepts colliding in her mind and jarring deep emotions. She sobs to her boyfriend, “Why don’t you get that I just need to cry because I watched Les Misérables last week and the rabbit I saw dead on the side of the road was so pathetic and my mom didn’t call last night and you didn’t retweet my tweet?”

Or they take a car trip together and after fifteen minutes of silence, she asks him, “What are you thinking about?”

“Uh?” He jolts out of a stupor. “Nothing.” He’s in his “driving box.” He perhaps has added to that the “listening to the radio box.” Thinking about something else? Not until he goes into the “talking about a topic box.” It’s not that he’s less intelligent, less capable of emotion, or less able to draw conclusions. He just thinks differently.

If you’re in a relationship with a guy or headed in that direction, spend some time figuring out how each of you think. You may each look different than the examples I’ve painted, but you will inevitably differ from each other in your thinking and processing. You’ll both benefit from understanding the other and finding terms to describe differences that arise.

You are valuable. You are born for a purpose, bought at a price. You are set free from sin and gifted in specific ways. You exist to trample Satan, to grab people’s hands and yank them toward the Savior, to live bubbling over with joy and praises of the God who designed you so perfectly. That’s what you’re made for.

You’re not made to find a man and settle down into a pretty American dream house.

Sure, getting married might fit into the plan God has for you. But it isn’t the plan. The plan is so much bigger. The plan is about you storming across the arena of life like a gymnast for Jesus landing flips and flinging your arms out in praise of your heavenly Daddy from now until death. You can do that with a husband beside you, of course. But you can definitely do it without one too.

To let the first guy without pimples who buys you a cup of coffee start kissing down your neck at the end of Date #1 is to say to God, “I’m not worth what you say I’m worth.”

If you’ve been kicked around, raped, insulted, or abused, hear this: You are priceless.

If your parents and teachers never thought you’d amount to much, read these words: You are priceless.

If no guy in high school ever expressed the least hint of interest in you, listen to me: You are priceless.

You are worth just as much as every other human being made in God’s image—the immeasurable cost of God dying for you to live.

When a guy comes along who does express interest in you, you owe it to yourself and the God who made you to take a good, deep, long look into this guy, instead of immediately concluding that he’s the guy for you.

On the first date I was asked out on in college, I sat trying to look interested in the guy’s video games before he walked me home with so much awkward insecurity that he literally hunched his back. At the door, he took me completely by surprise with an attempt to kiss me. I recoiled with a snazzy dance-like dodge. Back inside, I told a mentor-friend about the miserable date and we rolled with laughter imagining the crucial college course women should be required to take in dodging kisses.

God has planned joy and abundant life for you. Don’t be so hormonal or love-struck that you miss it. And don’t underestimate God’s ability to perfectly craft a life plan for you. You don’t need twenty guys; you only need one to have and to hold—or, as the case may be, maybe none at all. It’s ok to dodge kisses until the time is right.

Christine Jeske and her husband, Adam, have lived in Nicaragua, China, and South Africa. They now reside in the U.S., where she is getting a Ph.D.

In our early years of

In our early years of marriage we were given "Men Are Like Waffles--Women Are Like Spaghetti: Understanding and Delighting in Your Differences" by Bill & Pam Farrel. It is an great book for expanding on your first point.

Hi Thanks for your articles.

Hi Thanks for your articles. I've enjoyed reading them. I'm 18 still living at home for a year before I move with some friend to a bigger city for Uni. I've known this guy since the beginning of high school and now were quite good friends. He's actually one of the guys I'll be moving in with. I was glad that I had no attraction to him like that so that he'd be a good person to move in with. I am however now thinking about him more lately. Partially I think because of a cuddle we had one night star gazing with some friends which even though was perfectly normal in the situation isn't something he normally does. And partially because after that I didn't allow my self to process it because of a big exam I had in a few weeks. But now its over I've over indulged in thoughts of him. Perhaps I'm just being hormonal? I wonder how much of this is me just wanting a boyfriend. And also how much of this is considered just because I know we're moving to the same town. If we we were moving other places I'd probably easily let it go. I don't want to settle liking someone whose not perfect for me. I imagine this will blow over but I'm just curious what your thoughts are. Any advise for my age pacifically?

Great question, Anonymous friend from Nov. 23. Glad you're taking time to get advice on this, and my first thought is make sure you get advice from people who know him and you well, too--and preferably people a few years down the road who aren't going to just say what they think you want to hear. Next, it sounds like you could use some more specific thoughts on how to "take a good, deep, long look into this guy, instead of immediately concluding that he’s the guy for you," like I wrote in the article. Taking a good, deep, long look could include asking: Is he mature enough yet to be a role model and protector for you? Take a minute to imagine yourself as a little girl (not that you should think of yourself all the time like that--just try it for minute)--is this a guy you'd want taking care of you long term like a father cares for a child? Is he able to challenge you in your faith through conversation and by setting an example? Does he display fruits of a Christian life (love, joy, peace, patience, self-control, etc)? How does he deal with areas of sin in his life--does he admit when he does wrong and know how to apologize and ask for forgiveness? Does he quickly forgive you but also genuinely care about seeing you improve as a person? These are all questions to that help you start looking at the condition of his soul. You want somebody who's not just fun to have around, but somebody who's a genuine "soul mate"--and by that I don't mean just somebody who gives you some magical tingly aura when you're near him because you can finish each other's sentences, but somebody who is genuinely GOOD for the condition of your soul (and you for his). Start with that, being willing to wait if he doesn't have that kind of spiritual maturity, and let the rest of relationship details follow.

Last March, I had the honor of being a bridesmaid for one of my dear friends from work. The other bridesmaids and I decided to put together an amazing bridal shower a couple weeks before the wedding.

By Steve Tamayo
3 Questions for Every Dating Relationship