Why It’s OK to Disagree | InterVarsity
Skip to main content

Why It’s OK to Disagree 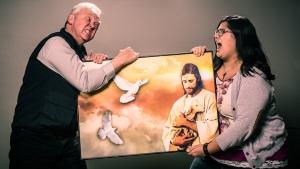 When I moved overseas, I joined the first church I found. It was different from churches I was used to, but the gospel at all was a comfort at a time when I was grasping for any constants.

Listening to the sermons became a marker of my language progress. I remember clearly the day I understood enough to realize that this church was way more different than I thought it was. I had known it was far from me on what we might call the church political spectrum, but that far? It was past the tipping point. If I had understood what they were saying when I first joined, I might have walked right back out the door. But at this point, I had already been in the church for nearly half a year. I had relationships.

The older people in my church had guarded and carried Christianity through government oppression and persecution. If God had not humbled me through my language learning, I would have cast aside what they had learned because they thought differently than me. But these people knew Jesus in a way that I did not.

What Makes Us One

Who are “those Christians” in your life? Maybe in your mind they’re even “those people who think they’re Christians.” What is the barrier between the two of you?

Because the Word of God, in whose defense we often make those assumptions, has much to say about being united with them.

Over and over again, Paul too exhorts the churches to whom he writes to seek unity. Despite what the law may say about us, once we are in faith we are one. Not once we are in agreement with the pastor or sign the doctrinal statement. Once our faith is in Christ—that is all.

In Romans 14, he even tackles the raging debate of the church of his day: what they may or may not eat. And do you know how he settles that debate? By not settling it.

Of course, he hits on the very reason we often use for driving a velvet-coated wedge between believers. We claim that we want to be sure their faith is sound, that they will be able to stand before the Lord. But all of our preaching and prodding will never make anyone stand—only the Lord himself can do that. And we see, here, that he has promised to do so.

So why are we still so fragmented as a church? If unity is such a priority, why don’t we practice it?

But the Lord is able to make us stand. Us—you, and me, and that Christian over there in the other church.

As God continues to lead me into more relationships with Christians with whom I disagree, I am finding that we are afraid even of conversations. We are afraid of learning from each other and disagreeing well, because it is easier to shout, “They are not us!” than it is to work hard to be one with each other. It is easier to ignore our disagreements or to ignore the possibility that we are wrong than it is to look only to Christ and him crucified above all of our differences.

Disagreement in unity is a difficult tension to hold—and that is precisely why the testimony of the church’s unity should be so profound. When Christ tells us to love one another, he knows that it is countercultural. He is well acquainted with all of his disciples’ fears. But his love is perfect. And “perfect love drives out fear.”

One of the greatest fears we express as we enter into the “to eat meat or not” debates of today is that we might, by living out love and unity in areas of disagreement and confusion, put the Word of God in jeopardy. But if we really believe that the Word of God is true and at work, and that it will achieve God’s purpose despite us, then we do not need to fear. Misty Irons addresses this tension well:

We evangelical Christians believe in objective truth. We are desperately interested in knowing the truth, presumably so that we can obey it. But perhaps God is showing us how much we have made an idol of pursuing truth, and the proof is that we seem to be more interested in being right than in being obedient. It is possible that God is deliberately keeping the answers we want just out of reach, so that we would be forced to return to the true things we do know: that loving one another is the second greatest commandment next to loving God, that love is the fulfillment of the law, and that this is love, not that we loved God but that he loved us and sent his Son to be the propitiation for our sins. Beloved, if God so loved us, we also ought to love one another.

By God’s grace, I learned to love the old women in church next to me, and then I learned from them. I learned endurance, and constancy, and the powerful love of the church across borders. I did not come to agree with them on everything, but I came, humbly and gratefully, to call myself one with them. And that is a truth on which we must fearlessly agree.

Disunity in Christ
Despite Jesus' prayer that all Christians "be one," divisions have been epidemic in the body of Christ. Though we may think we know why this happens, Christena Cleveland says we probably don't.

I’ve noticed a sometimes frustrating theme in my life: most people are different than me and act differently than I do.