Why There’s No Such Thing as a Soul Mate 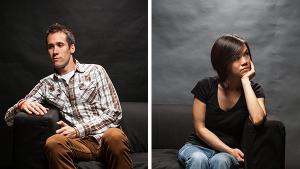 I recently got an email from a guy who was feeling frustrated with relationships. He had recently asked a girl out on a date and had been turned down. She explained to him that she was waiting for her “soul mate.”

Apparently, she didn’t think he was the one.

My heart goes out to this guy because getting turned down always stings, no matter how spiritual or holy the rejection may be. But I’ve met more than my share of singles who are sitting around, waiting for their soul mate—as though one day, there will be a magical knock on the door and “poof,” their soul mate will be standing on the other side.

The Mythology of “Soul Mates”

I think this philosophy of a “soul mate” has done far more harm than good in our society. And it’s had plenty of time to do so, since the idea is actually rooted in ancient mythology. The story goes that the gods split human beings as a form of punishment for their pride, and that since then, we’ve been on the search to find our “soul mate” in an attempt to become complete, whole people once again.

Ancient mythology also declares that a person experiences an unspoken knowledge—some sort of feeling—when they come face to face with their soul mate. Which would mean that we’re essentially half-full people waiting around for someone else to complete us.

I don’t know about you, but that doesn’t sound very healthy to me.

Beyond the fact that the term is founded completely in fairy tale, it’s also entirely unbiblical. It’s a phrase that promotes “feeling” and “energy” as what attracts one person to another. And this is a dangerous concept. It fools us into believing that love and marriage hinge on emotional ecstasy.

How long will it take us to learn that feelings can’t be trusted? And that they should never be the sole foundation on which an entire relationship is based? Because at the end of the day, feelings come—and then feelings go. Those who build their relationship on the foundation of “feeling” will find that when the storms come, their love quickly crumbles.

Years ago I worked with a couple who we’ll call Sherry and Jake. They arrived at my office two years into their marriage—a marriage that was crumbling right before their eyes. They had lost their spark, their chemistry, and weren’t sure what to do. But through the process of counseling, they chose to prioritize their commitment to one another above their feelings, and worked to display actions and behaviors that reflected that commitment, no matter what their feelings were saying. In essence, their actions led the way—and eventually, their feelings followed suit. They were able to restore their marriage to a place that was even better than it had been before. Their story is a reminder that no matter the context of the relationship, feelings are not strong enough to be the foundation of a healthy relationship.

How to Have a Healthy Dating Relationship

All over the world there are Christian men and women who believe that they are incomplete now and will continue to be until that magical moment when they come face to face with the love of their life—that one person who will automatically stir their heart and connect deeply with their soul. But the truth is that there is no such thing as a person who will complete our souls, because according to God’s Word, we are only made complete in him (Colossians 2:10).

Healthy relationships begin by understanding where our completeness comes from. And they are based on positive interactions, effective communication, and an emotional give-and-take with another human being that reflects health and wholeness. They are founded in faith, rooted in good choices, and grounded in hard work and a whole lot of grace. Don’t get me wrong—healthy relationships will always come with an abundance of healthy feelings, passion, and romance too. But they may not always start with those emotions.

If you’re waiting to meet that person who will trigger some sort of magical moment inside of you that will dub them as “the one,” there’s a good chance you’ll be waiting for a long, long time. Instead, do yourself a favor and begin to make connections with the people God has placed in your life. Get to know yourself, and then get to know people of the opposite sex who have the qualities you are looking for in a future mate.

And when you discover someone you’re interested in, don’t freak out if the feelings aren’t magical or mystical, because frankly, they were never intended to be. Instead, look for qualities, traits, and characteristics that are attractive based on the things you know you need and want in a relationship. And take it all one step at a time. Rest assured that true love is based on a healthy combination of facts and feelings, and a whole lot of good choices.

May God give you the wisdom to choose well.

Debra K. Fileta is a Licensed Professional Counselor specializing in relationship and marital issues. She, her husband, and their two children live in Hershey, Pennsylvania.

Thanks for this great

Thanks for this great word...it has really been an eye opener...God bless!

By Steve Tamayo
3 Questions for Every Dating Relationship

Congratulations! You’ve found someone you want to date who wants to date you back! They’re cute, funny, and sincere with similar interests and values.