Why We All Need All Saints’ Day 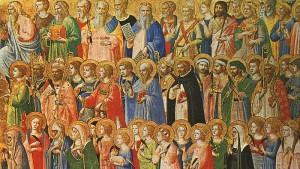 My childhood piano book contained a picture of blue-robed, smiling trombone players next to the music for “When the Saints Go Marching In.” For years, I had no idea what the song meant. Why were they marching? Was this a song about the band that played for the football team? When were the saints going to march . . .  and into where? And, most confusing, who on earth were the saints, and why did they all play trombones?

Fast-forward from my childhood to my angsty teenage years, most of which were spent trying to find a door that opened onto the path of salvation. Not necessarily my salvation, but the world’s. I wanted ferociously to do something that would matter, but I didn’t feel like I could. Every time I tried to be selfless I was caught in a horrid quagmire of “selfs”—self-pity, self-admiration, self-centeredness, you name it. I was stuck.

And that was when I discovered the saints.

So who are the saints?

The saints are people who did stuff that really mattered. William Wilberforce? Devoted his life to fighting slavery. Corrie ten Boom? Selflessly risked her safety for the sake of others. Martin Luther King Jr.? Now that man had been to the mountaintop.

I was looking for stories of people who had changed their world for the better—and I found them. Lots of them. I kept coming across people who inspired me, whose actions and writings and stories were deeply rooted in their faith. And, as I looked for the secret of their motivation, I found them continually pointing back to God—to the things he had done and was capable of doing.

These people had truly marched across the pages of history, and more than anything, I wanted to be one of them. Their stories showed me the miraculous truth that the loving character they exhibited—and the selflessness I aspired to—was not based on their own strength, but on their tremendous faith in a strong and loving God. Seeing God’s faithfulness to them changed my faith.

The Goodness of Remembering

Looking back at God’s work in the lives of saints affords us an opportunity to learn about his faithfulness that looking forward does not. Again and again in the Scriptures, God pleads with his people to remember the things that he has done for them. He establishes festivals that teach them to celebrate what he did in the days of their fathers and mothers. A huge part of Deuteronomy is just Moses retelling the stories of what happened between God and Israel.

Looking back also grounds our theories in truths. We say God is powerful, and tremble to think of him parting the sea. We say he provides, and remember manna in the wasteland. We say he is loving, and then we gather together to break bread and pour wine in remembrance of the cross that saves us. Again and again we see his character revealed through his actions toward his people, and it’s through this that we are able to be certain of what we do not see and cultivate faith.

Where are we marching?

Remembrance shouldn’t drive us to live in the past, though. Quite the opposite! God asks his people to remember, yes, but he also tells them not to dwell on the past, and to look instead to the new things that he’s doing (Isaiah 43:16-19). Our remembrance of God’s character and his work in others’ lives, as well as in our own, doesn’t make us stagnant but rather drives us forward in the faith with confidence gained from the stories we’ve heard and told.

In Hebrews, the writer recounts a list of saints and then, with a flourish, tells us this:

Therefore, since we are surrounded by such a great cloud of witnesses, let us throw off everything that hinders and the sin that so easily entangles. And let us run with perseverance the race marked out for us.

Those words contain some serious verbs of motion. Because of the stories of what God has done for others, we may go forward.

So today, on All Saints’ Day, take a look at the people who have marched firmly on in the faith before us, and be encouraged by our faithful Lord. Even if we never make it to trombone lessons and blue robes, with his grace, the steps we take as we march can be ones worth remembering by those who come after us.

Who from the past are you most thankful for? Leave us a comment!