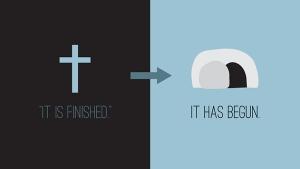 A friend of mine once went to an evangelism training seminar for campus ministers where they were asked to share the gospel with each other to practice. Once they were finished, the director pointed out that they had all described the message beautifully but made the same mistake.

Everyone had forgotten to mention that Jesus rose from the dead.

In a room full of people who love and serve college students for the sake of Christ, every single one of them was too caught up in explaining the implications of his death to remember to point out the hope of his renewed life.

We laughed over the incident, but it made me wonder what is taken away from the good news when the resurrection is removed.

As it turns out, the good news stops being good when the story ends at the grave. Paul tells the Corinthians that “if Christ has not been raised, your faith is futile….If only for this life we have hope in Christ, we are to be pitied more than all men” (1 Corinthians 15:17, 19).

The Insanity of Easter

Easter is conceivably our most insane holiday. This is the day when we celebrate a dead leader who came back to life. We clap our hands for a seemingly impossible occurrence, and we greet each other with affirmations that our Savior has risen.

If the resurrection never happened, then we’re just a bunch of fools singing senseless songs about a pile of dust under a rock.

In Paul’s letter to the Corinthians, though, he is not concerned with how sane we look on Easter Sunday. There is something much greater at stake. He’s talking about our faith and our hope: the things that are, for Christians, the foundations of our lives. If Christ was not raised, he says, then it has all been in vain. Everything we believe is false. Every standard we live by is rootless. Everything we hope in is a mirage.

The resurrection, then, is the basis of two things. First, it’s the basis of Jesus’ credibility. He continually asserts throughout his ministry that he is going to die and then be raised from the dead. The fact that he stepped out of that tomb gives authority to the words that he said. His resurrection means that we are not hoping for a dead man to forgive our sins and lead us to glory; we are, instead, following a risen King, one who has shown his authority to fulfill the promises that he has made to us.

Second, the resurrection is the basis of our new life. Jesus did not die, go to heaven, and send down a message saying, “Hold down the fort, guys. I’ll meet you up here when you’re done.” He died and returned to life on earth, going back to the people he walked with when he said, “I have come that they might have life, and have it to the full.” That fullness of life wasn’t meant for a vague vision of golden streets, but for the very paths on which they walked every day. He promised eternal life to those who believe in him, and then he toppled the tombstone named Death. In doing so, he invited his followers into a new life that they do not have to wait for. Christ’s abundant life is not waiting on the other side of the grave; it’s available now, because he has destroyed the power of separation that the grave once had. No longer do we wait to enter the kingdom of heaven once we pass from this earth. The kingdom of heaven has come, and there is nothing to keep it from us.

The Best News Ever

The authority of Christ over death is good news, because it turns the gospel message from just a hope for the future to a hope for today as well. By conquering death, Jesus offers us a chance to live outside its shadow.

Too often, we talk about dying to ourselves and to our sin without remembering that “if we died with Christ, we believe that we will also live with him” (Romans 6:8). To leave the resurrection out of the story of the gospel, though, is to cheat our listeners out of the great invitation to a new life. He offers us life here, now, and forever, in place of an existence of hacking away at our own sin in an attempt to escape death. The victory is already won. We celebrate the resurrection on Easter Sunday, but as Christians we live in it each day—and we have the opportunity to do so abundantly.