Do You Have a Safety Net? How Community Helps Us Turn from Sin | InterVarsity
Skip to main content

Do You Have a Safety Net? How Community Helps Us Turn from Sin 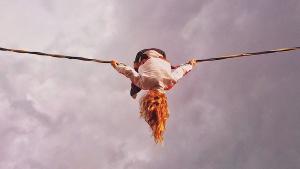 My heart aches when I hear of a Christian leader who steps down from ministry because a hidden sin got revealed. I’ve been affected by situations like this and can’t imagine how many others are hurt and traumatized by this. How can we guard against hurting ourselves and others in similar ways?

A crucial gift that God has given us is Christian community. And by community, I don’t just mean Christians who hang out together but friends who lovingly speak God’s truth in grace to keep us on the right path. This is the kind of community the Bible encourages us toward.

Proverbs 10:11 says, “The words of the godly are a life-giving fountain.”

Ephesians 5:12 says, “We will speak the truth in love, growing in every way more and more like Christ, who is the head of his body, the church.”

Will we allow others to speak correction to us? Will we use the safety net that God graciously gives us?

I can think of many times in my life where loving friends spoke God’s truth to help me turn away from sin. I would like to share a few stories.

In my early years on InterVarsity staff, I heard during a team meeting about a male speaker who confessed to sexually abusing children and another man who shared about his struggle with pornography after a ministry time with our team. When I heard that, I was upset and shared my bitter disappointment with men. My team leader told me that my attitude of bitterness toward men would be harmful in my life and then asked if I was willing to repent. Shocked that I was being confronted, I knew that I had to say yes to God. She then asked if I would be willing to confess my sin and have my brothers who were present pray a blessing over me. That was over 30 years ago, and four of the men who prayed for me are still close friends.

During a summer missions trip to Mexico, my team complained about a student who was “snobby” and ignored them. I thought the best solution was to tell the student how others were feeling, so I approached her with another staff member and gave her the feedback. My team was relieved. When I got home, however, once my supervisor heard what had happened, she confronted me. “Why didn’t you explore your team’s attitude with them instead of demanding that the woman be more loving?” she asked. “Why didn’t you ask them to reach out to her and even buy her flowers to show love to her?” My supervisor added that even if I was 99 percent right, I needed to own any wrong that I had done and ask for forgiveness. So I took this student to lunch and asked for forgiveness, and God brought healing to a relationship with someone whom I have now known for decades.

I once had a huge conflict with a coworker. There were layers of hurts and misunderstandings. Even after we tried conflict mediation with two close friends and a Catholic priest, the conflict continued. When I talked with a close friend about it, she told me that the drama would stop if I let go of being right. That was hard to hear because I wanted to be understood. But I decided to see what would happen if I stopped trying to explain myself and stress my points. Amazingly, what my friend said was true. When I gave up being right and trying to be understood, the drama stopped.

Another time, in a relationship with someone younger whom I was spiritually mentoring, I became more dependent on her than she was comfortable with. Because I was her leader and older than her, she found it difficult to be honest with me, but she shared this situation with the team that we were on. The team recommended that we not spend time alone so that healing could take place. This was difficult for me, but I chose to follow their wisdom. Over time, God brought much healing for both of us, and today she is one of my closest friends.

Can you think of situations in your life when you received needed correction because of your blind spots? Unfortunately, our blind spots often bring out the worst in us. We all need a safety net of godly friends who speak God’s truth in love. It’s uncomfortable to be vulnerable and honest, but when we let go of pride, control, and self-sufficiency, God moves powerfully in our lives. I’ve experienced much more than repenting from bitterness, judgment, and being right, and I continue to be redeemed by God in community.

I’m thankful for people who are a safety net for me because they love me enough to be honest when they are concerned about something in my life. Some are friends with whom I have lots of history in giving and receiving significant input. We are completely honest with each other, and I know that they love me and want God’s best for me. Others are newer friends, like an informal small group in my church that was started two years ago. We communicate in person or even by group text and ask for prayer when needed, and we give one another important feedback.

Being in community with friends who will really speak God’s truth to us in love takes humility, openness, and great intentionality. I choose to not have “secrets” but to instead include community in the things that I struggle and wonder about. As a Christian leader, I make sure I have peers and am not just friends with those whom I lead. I also tell those I lead that I am open to their feedback if they have any concerns, which gives them permission to bring things up with me.

Unfortunately, I have also experienced people withdrawing from me because they did not agree and felt uncomfortable when I brought something up in their lives. It’s easier to live without anyone challenging your actions or thoughts, but we will also be more vulnerable to unexpected hidden sins that can ruin our lives and ministry.

Do you have a safety net? Are there people in your life who lovingly share with you where you need to turn away from control and sin? If you don’t have accountable peers who you are completely free to disclose anything to and receive feedback from, it is possible that a hidden sin may be controlling you. It’s easier to do things “my way” and disregard input, but you will also be more vulnerable to calamity that will greatly affect you and others.

Brenda has spent over 41 years leading, discipling, and developing InterVarsity students and staff in San Francisco and Hawai`i. You can support her ministry at https://donate.intervarsity.org/donate#17.

This article speaks to some

This article speaks to some poignant thoughts as it relates to my life. Because I left New York many years ago for Hawaii there was a time I was without my Christian community and needed people to bounce ideas off of, get spiritual counseling or feedback and just someone to be honest with me. My strong (and sometimes overbearing) personality can cause some people to be afraid of confronting me with the truth. But I am blessed to have a group of people who can now challenge me, speak truth and life to me and uphold me when I can’t. Even Christ relied on His community to hold him in up prayer (Garden of Gethsemane) when he needed them. If Christ needed a community, how much more do we? I sure welcome and need one.

By Brittany Small
The Attitudes That Keep Us from True Community

Finding community is hard. We cautiously and optimistically put ourselves out there—we make introductions, learn names, give hugs, take risks, and make invitations like we’re staving off a great white shark in a scene from Jaws. And just like Martin Brody, we’re preoccupied with one question: “Will I survive this?”

Community Is Messy
Drawing on her background in environmental engineering and her current pastoral role, Heather Zempel assesses the perils and possibilities inherent in small groups and other environments for Christian
Login