Does it Spark Joy? Being Obedient with Possessions | InterVarsity
Skip to main content

Does it Spark Joy? Being Obedient with Possessions 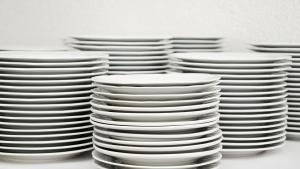 With all of the hype surrounding Marie Kondo's famous book and Netflix show about tidying and decluttering, we're exploring what 'decluttering' could mean for our Christian walks with Jesus. Today's post is written by Sarah Schilling, InterVarsity Study Abroad Staff who lives overseas in Paris, France.

I lived back home for an embarrassing amount of time after grad school.

This wasn’t some wise decision to enable me to pay off my student loans. This was dire necessity. This was a failed tech startup and a part-time job at a doggy daycare not exactly being the adulting dream come true.

I didn’t have money to buy groceries or furnish an apartment, and it was unnecessary to do so anyway. No need to pull out the credit card at Bed, Bath, & Beyond when Mom’s turned your childhood bedroom into a guest room with a rustic-rose motif (not really my jam, but neither was homelessness). No need to binge watch from your phone when Dad’s got more than one flatscreen...and he’s paying for the Netflix account.

When I finally got my own apartment nine years later (told you it was embarrassing), I was thrilled to choose dinnerware at Target. Nearly everything I had in that apartment was a hand-me-down, but that matching set of plates and bowls was mine--all mine. They meant I was paying for and cooking the food I ate off of them. They meant I was free to have friends over for a meal whenever I wanted, without worrying that my pajama-clad father would walk into the room. They meant independence.

Those plates and bowls were the hardest thing to give up two years later when I sold everything. I had to sell everything, because I was moving to Paris on a missionary budget.

Über-planner that I am, I went spreadsheet crazy cataloging what I would sell, donate, or trash. As I did, I became aware of various levels of attachment to my belongings.

A few hundred dollars for my mattress? Buh-bye, bed! Seeing a friend rocking one of my dresses in her own style? Upcycling for the win! The ratty slippers my dearly departed Golden Retriever used to carry around as a “present” for me? Should’ve been thrown out ages ago!

Even though I knew the Target dinnerware had to go, it had a bizarre hold on me. And I had to talk to God about it.

For nine years, dependence on others had been a painful and constant reminder of my failure to launch. After surviving that excruciating season, the two years I spent in my own place were an enormous gift. It felt like God was asking me to give that up, yet giving me the unknown in exchange. Something as simple as dinnerware symbolized what was holding me back from fully depending on him.

I had to unclench my spiritual fists and confess that autonomous adulthood wasn’t what should define me. Being a beloved child of God should. God was asking me to trust that he and the body of Christ in my future home would be there to catch me when I took this leap of faith.

With the downsize for Paris, God shifted my perspective of dependence as personal weakness to dependence as a choice to trust in Jehovah Jireh, the Lord who provides.

So, I took a photo of the plates and bowls, and added it to my Facebook sale. Two weeks later, I moved to Paris with just two suitcases and a carry on.

My first apartment in France was shared with two flatmates. The only space to call my own was my 12’ x 12’ bedroom/office. It was sparsely furnished, and the futon stopped unfolding all the way after three weeks. Voilà: my first adult purchase abroad was a sofa-sleeper bought off the French equivalent of Craigslist!

Ironically, during my prayer times early on in France, I sensed God encouraging me to “m’installe bien” (settle in well), both in terms of decorating my space and establishing a community. With this exhortation, however, came hesitation: Could I really justify buying an area rug on my salary? What if I nailed pictures up on the walls only to be swept back to my parents’ house because my fundraising fell short? Not even two months passed and I already needed to re-up my trust.

Off I headed to find throw pillows, an end table, lamps, and frames. My obedience to decorate was a means of creating a welcoming space for the community God brought my way. Even though my plates didn’t match and someone usually had to sit on the floor, I was able to invite acquaintances over and watch God transform them into friends.

Owning possessions became about stewardship rather than proving I was an adult. The divine invitation this time was to be attentive to what God might be encouraging me to own and how it could serve other people and purposes.

Two years into French life, it was still a struggle. On a weeklong pilgrimage to Taizé last summer, I literally had to pray and journal about buying a set of mugs. That may seem extreme, but it turned out to be an invitation to freedom in Christ. I didn’t need the mugs, but they were beautiful and handcrafted by the monastic brothers, and I wanted them. I sensed God was inviting me to buy something I would enjoy. The added bonus was that the mugs are used during prayer times with my new prayer partners in Paris.

Now, nearly three years in, I’ve recently moved to a new apartment and, hallelujah, I’m on my own again! I was able to move via suitcases this time around too. My landlords (friends from my Parisian church) left the apartment equipped with most things I need, including their plates and bowls.

In this new season and space, I don’t have to accumulate things, not just because they’re already here, but because the invitation now appears to be about “living simplicity,” as says Franciscan scholar Chantel Fouchi. Rather than living simply, which describes a lifestyle, living simplicity is a lifestyle. Like stewardship, it’s about seeing everything as a gift from God and acting as though it is. It’s about winnowing down to what’s needed to carry out God’s will.

Quite often what’s needed is not more things, but more love. Love for creation: I’m trying to go zero waste and take advantage of compost bins. Love for people: I invite my entrepreneur friends to cowork, students for meals, and church friends for prayer and worship. Love for God’s purposes: for me, this means continually submitting to God’s plan, whether I stay in France or move back to the U.S.

Right now, I believe I’m still supposed to “m’installe bien” and seek God’s Kingdom come in Paris as it is in heaven. But that could change. Regardless, if I’m not tied down by physical things or how they define me, I’m free to love who and how God shows me, here or anywhere.

Though by a different path

Though by a different path from mine, Sarah expresses well the freedom from Mammon that Jesus gives.

Sarah, I rarely read articles all the way through, but yours was captivating and easy to finish! An international student in the U.S. I still went to study abroad for a semester in Toulouse and had a lovely time. So excited and grateful for the life you are living and nourishing. I'll have to check out Chantel Fouchi. I went on "Journey Assisi" and it started my love for "Franciscanism". Richard Rohr and CAC have an online course on Franciscan worldview. Highly recommend! Peace and prayers to you!