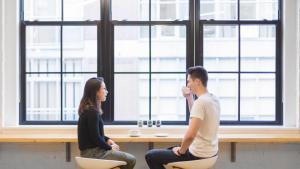 Online dating. Some blame it for the most ridiculous, awkward moments of their lives. Others have a spouse because they gave it a shot. Commercials claim it’s the best way to meet singles. And YouTube parodies and newsreels highlight every possible way it can go wrong.

So, should you try online dating? After months of asking myself that same question, I decided to try it out for about half a year. Here are a few things I wish I would have thought about before diving into the quirky complexity that is online dating.

If you’ve never tried online dating before, the closest equivalent that I can give is job hunting, oddly enough. You create a profile (i.e., résumé), you publish it on the dating site (i.e., job board), and you wait for someone to notice and give you a wink, poke, smile, etc. (i.e., job interview request). Meanwhile, you search through other profiles (i.e., prospects) looking for potential matches. If that sounds a little strange to you, yes, it absolutely is. Online dating is the twenty-first century’s hybrid of more conventional dating approaches.

My biggest piece of advice is to keep in mind that beyond all the buttons, the swiping, and the personality profiles, this involves real people. Be shrewd. Be careful. Our actions in this virtual space can have real implications for both them and you.

Not everyone on dating sites or apps recognizes this, and some have less-than-honorable intentions, as you probably know. Not everyone operates by the same set of rules either. One of the biggest debates I had was whether it’s okay to talk to more than one person at a time. It can be more efficient to communicate with multiple people at once as you try to find the “right one,” and it seems like a fairly common thing to do. But at the same time, it can feel a little underhanded and cause awkward moments or hurt feelings if someone you’ve been communicating with suddenly starts to ignore you while moving forward getting to know somebody else.

Similarly, it won’t take much online dating to discover that some people just won’t respond to you. More than once, it seemed like I’d found a really great person with a lot of the same interests. I’d send a message. I’d wait and wait and . . . nothing. A little discouraging, but a clear sign that it was time to move on. Cue the “more fish in the sea” clichés.

One last thing you should be aware of: “Christian” can mean a lot of different things. I’ve found faithful, devout Christians on both Christian-targeted online dating platforms as well as non-Christian ones. But it’s best to proceed with caution. Don’t wait too long before asking what the person’s faith looks like on a practical level.

When it comes to dating, online or in person, compatibility is a hot-button term. But many people never actually consider whether they’re compatible with the dating approach they’re trying. So before you pay for an online dating service, ask yourself questions like these (you just might end up saving yourself some time, money, and frustration):

How do you typically connect with people? Do you need a lot of face-to-face interaction before you feel like you really know someone, or do you think messaging or texting is enough, at least to start things off? What’s your personality type (yes, I have seen Myers-Briggs types occasionally referenced on profiles)? How could that benefit you or hold you back if you try online dating?

Overall, online dating seemed to fit my personality well. As an introvert, I was able to start getting to know people without the added pressure and uncertainty of a blind date or first date with little to no conversation ahead of time (#istheresomethinginmyteeth?). Online dating also supported my tendency to internally process things. I could receive a message, take time to reflect, and then respond instead of having just a few seconds to answer during a face-to-face conversation. This was especially helpful with deeper, more complicated subjects.

However, online dating had its cons too. Though it helped me feel more comfortable initiating conversations, I think I relied on that a little too much compared to talking with someone in person. And when people would randomly stop talking to me or ignore my message, I definitely took that more personally than I should have. That’s just part of online dating.

If you can glean anything from all the starkly different opinions out there, it’s that online dating isn’t for everyone. Sometimes it works. Sometimes it doesn’t. Don’t pin all your hopes and dreams on this one medium to find your “soul mate.” God can be extremely resourceful and creative when it comes to this kind of thing. My parents—when they least expected it, when they’d pretty much given up on dating—first met after being set up by a nurse at a clinic, of all places.

Also, keep in mind that online dating, more than anything else, is an on-ramp for you to begin connecting with people. Though it can help remove some of the squirmy, palm-sweating awkwardness of first dates, it’s probably not going to get rid of all of that. And tools like personality profiles and compatibility tests can only go so far. Just because a test says you’re 100 percent compatible with someone, that doesn’t guarantee you’ll be able to stand being in the same room together for more than five minutes. Online dating can never replace face-to-face interaction.

That said, the timing of meeting someone for the first time is important. For me, meeting after only a couple days was not a good idea, especially when it was last-minute, on Black Friday, when I only had a T-shirt and hadn’t shaved (#guylogic #whatwasIthinking???). Waiting too long, as in several months, to meet can be a problem too. Texts and messages give you a limited perspective of a person at best, and you run the risk of starting to invest too much of yourself in a relationship with someone you’ve never met. Once again, I had to learn this the hard way.

Obviously, there are a lot of things worth considering before hitting that “Sign Up” button. Here’s one last thing—by far the most important, though. Proverbs 3:6 reminds us that if we acknowledge God in all our ways, he will guide us. That includes online dating. All the human advice, all the thought and reflection in the world, cannot compare with the wisdom of the One whose timing is always perfect and who knows you better than you know yourself. Seek the Lord first, and seek him often, in this and in all things.

Awesome, enlightening peace. I met my husband online and I can confirm what you sharing is true.