Being Globally Missional on Campus | InterVarsity
Skip to main content

Being Globally Missional on Campus 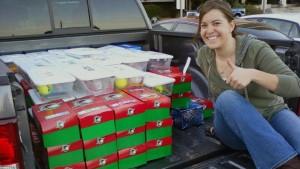 Have you ever felt like your dream of reaching the world from your campus is simply too incredible and improbable?

What if you could bring about 400 students from nearly 20 influential student organizations on your secular, liberal, diverse, commuter college campus together for a purpose: to spread the gospel around the world?

Go ahead, read that again.

I wouldn’t have believed it—until it happened during my fall 2012 semester at the University of Nevada, Las Vegas (UNLV). It all started with mundane shoeboxes.

Every November, churches, nonprofits, schools, and even corporations around America hit the shopping-cart superhighway for toys and treats, school supplies, and hygiene essentials to pack into shoeboxes. This is Operation Christmas Child (OCC), a Samaritan’s Purse project that brings Christmas and the gospel of Jesus Christ in every box to children in over 130 countries through whatever means necessary, whether by truck, boat, camel, dog sled, or elephant.

To the underprivileged children who receive these shoeboxes—they may not even know what proper footwear is—the simple cardboard packages are loving gifts that can all at once make them laugh, cry, and smile like they never have before!

For years, InterVarsity at UNLV had participated in OCC. In the summer of 2011, however, we began to do something bold—something we’d never done before. I dared to ask our leadership team whether we should go campus-wide. It would require a much greater level of service than OCC had before. But after much prayer and debate, we initiated and led Operation Christmas Child UNLV (OCC UNLV) by making strides in three key areas. You may be able to use these concepts for global missions on your own campus.

Challenge #1: Finding Others to Join Us

The easiest way to rally a commuter campus around a cause is to work with other organizations that already have a reach of their own. So, during September, we dug deep into our networks. Asked people if they wanted to get involved. Convinced others to join us. And prepared to be rejected.

In 2011, six organizations joined us. But in 2012, after seeing our success, 20 got involved, including all 10 fraternities and sororities of Multicultural Greek Council and a majority of pre-health students!

UNLV and our InterVarsity chapter there are very competitive environments, so we developed the Student Organization Competition to ramp up the excitement for at least two weeks before OCC’s National Collection Week in November.

To make things fair, organizations competed in two or three divisions based on their size. (As the host, our chapter didn’t compete; our small groups just competed among themselves.) We awarded everyone a certificate recognizing their participation in a community service project, and division winners got prizes: plaques in 2011 and care packages in 2012. The 2012 Large Division winner said, “You have no idea how important these pens, index cards, clipboards, stress balls, and organizers are to us!”

Our point system was no afterthought. Organizations could choose to pack shoeboxes, fundraise, or do both, but our top priority was the shoeboxes. Since $7 is OCC’s suggested donation per box, we awarded 10 points for every shoebox packed but a maximum of 10 points for every $15 raised. In other words, the more shoeboxes packed, the faster the points accumulated!

Psi Chi president and InterVarsity member Carla Farcello said, “I loved how the student organizations that were not ‘Christian’ or faith-based were so enthusiastic about the project!”

We didn’t get to maximize this opportunity, but we definitely sowed seeds by successfully integrating two goals: connecting with our fellow students and spreading the gospel globally. Christina McIntosh, one of our project leaders and Alpha Phi Omega member, said, “The best part of working as a project leader was seeing different groups that normally didn’t partner with each other come together . . . to serve another community. . . . Not only did [it] continue to get organizations involved and working together, but it also encouraged more students to start up similar projects of their own!”

Along the same lines, Joseph Litto, InterVarsity at UNLV staff team leader, said, “We live in a generation where justice issues such as systemic poverty are a popular cause to get behind for both faith and non-faith-based groups.” We’re very grateful for the partnerships that were created—we just need to continue to develop those connections into friendships.

What Will You Do?

At UNLV, God didn’t tell us that we’d be able to impact just shy of 1,000 children in two years. We simply became instruments of his global mission from our very own campus.

What about you? Maybe God is calling you to minister globally by serving locally. Through shoeboxes, even! How many lives could he use you to touch? Many more than you’d ever believe.

How is your chapter creatively partnering with others on campus and caring for those around the world? Leave us a comment!

JR Planas was InterVarsity Christian Fellowship at UNLV’s Public Relations Team Coordinator and Operation Christmas Child UNLV Project Leader for 2011 and 2012. Though he’s moved on to other opportunities, the chapter will be carrying on the legacy of OCC UNLV in the coming weeks.

Or start one of InterVarsity Press’s new Forge Guides for Missional Conversation with your small group.

Our chapter at UNR (Reno, NV)

What a wonderful way to unite

What a wonderful way to unite a campus around a service opportunity. Thanks for sharing. JT