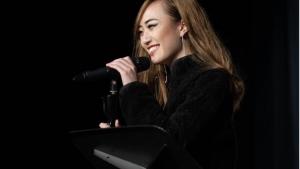 “I wanted to feel anything but what I was feeling. I didn’t know how to cope with anything, and I just wanted to feel complete, like my life had meaning, because I was sick of feeling hopeless all the time.”

Boyun, neuroscience major at the University of Texas at Dallas, craved something more—something that would fix her problems and heal her trauma. Her years-long battle with mental illness and newfound drug addiction plummeted her onto her knees.

“I was so desperate that I prayed for the first time, and I began to explore spirituality,” Boyun said. “Growing up as an atheist and agnostic, I really thought that Christianity wasn’t for me, especially with all the questions I had.”

Boyun was born in Dallas and raised in a family that wasn’t religious in any way. She attended church a handful of times, but never felt like it made any sort of difference in her life.

From the time she turned 14, Boyun struggled with ravaging mental health problems that would continue into her transition to college. At one point, she even survived a suicide attempt and never thought she’d make it past high school.

This was why, as she began college, Boyun didn’t know what to expect. Nothing about life gave her excitement, and she found it difficult to care about anything. She quickly joined in the party scene on campus and began dating someone who encouraged her to try drugs for the first time.

“What started as a moment of thinking, Sure, whatever, turned into an addiction that lasted about a year,” she said.

Through all of this, Boyun did have one refuge—the Filipino Student Association. Though much of what she did with other students in FSA was attend parties, she was still able to develop deep friendships with her co-members that would last.

There were others in her life that wanted to see Boyun turn to Jesus. In the midst of her addiction, her friend David gave her a book. Boyun read it with the expectation that all it would do was prove to her that God wasn’t relevant. But instead, as Boyun read, she felt as though so many of her questions were answered. The gospel was presented in a way she had never heard before—a way that brought clarity and felt personalized.

“I repented from my drug abuse problem and accepted Jesus into my life,” Boyun said. She saw how Jesus would fulfill everything she needed or wanted, and everything she had hoped to find through other things up to that point.

A Story That Could Change the World

Also a Christian, Boyun's cousin who was a student at the same university invited her to an InterVarsity social event. “I went to meet people, but ended up not coming back,” Boyun said.

But that wasn't the last time Boyun met InterVarsity students. Shortly after, she heard about a spring break opportunity called SAUP (San Antonio Urban Plunge) and was intrigued by the idea of a mission trip. So she signed up.

SAUP was a chance for students to engage in topics and activities that showed them how Jesus could heal challenges in communities. Boyun discovered how Jesus not only fulfilled her but could use her to bring real change to others as well. She was surprised to learn that, if more people followed Jesus and joined him in his mission, injustices like human trafficking and gentrification could be alleviated.

This completely shifted Boyun’s view of her new faith. She saw how important evangelism and showing the love of Christ to others was, how the campus was a mission field, and how the gospel could be an actual, practical solution to pain.

“The gospel had personally impacted my view on people, myself, and the things around me,” Boyun said. “But I was never convinced that it was a story that could change the world and systemic sin until I went to SAUP. . . The way I loved and cared for my friends radically changed.”

Since then, Boyun “went off sprinting,” as she likes to say. Wanting to both sacrificially care for and love her non-Christian friends and show her InterVarsity friends how important it is to continue engaging with friends with different beliefs, she stayed deeply involved in FSA. One of her FSA friends even attended her region’s Chapter Camp with her and gave her life to Christ.

There are still struggles in Boyun’s life, and experiences of the past sometimes still haunt her. But she’s seeing how much bigger God is than those things, resting on his purposes for her, and believing that sharing her story of brokenness can show others that God is real.

This summer, Boyun went back to San Antonio for the summer-long SAUP, hoping to continue to develop her solid foundation on Jesus. She’s even discerning going into full-time ministry at some point after college, possibly as an InterVarsity staff.

“InterVarsity had a huge impact on my spiritual growth, and I never would’ve considered ministry or evangelism to be so important,” Boyun says. “God used InterVarsity to teach me how his love can transform lives.”

Right when Boyun experienced a radical turn to Jesus, InterVarsity was there to help develop her new faith and show her what that meant for others in her life–and for the world. To find an InterVarsity chapter on your campus, click the button below.

Carlos was a well-known atheist who enjoyed his Christian friend's company. When she invited him to an InterVarsity retreat, he thought, Why not?

On the Way Home

Taylor didn’t want to have anything to do with Jesus. But when an opportunity came to serve a hurting community, she joined InterVarsity on a trip that changed her life.