Can Culture Fit with Faith? One Graduate’s Story | InterVarsity
Skip to main content
By Nathan Peterson

Can Culture Fit with Faith? One Graduate’s Story 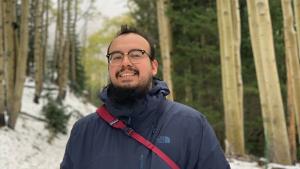 “It completely blew me away.”

That’s how JD Mercado describes his first InterVarsity large group at Northern Arizona University (NAU). They worshiped in Korean, Swahili, and Spanish—something he’d never experienced before. “I just felt a sense of peace, not fully understanding the significance of multiethnic worship at the time, but just an innate sense that something was right, something was being done the way it should be, and that God was at the center of that experience,” he said.

JD had just transferred to NAU during the spring of 2013, and he had only known about its InterVarsity chapter for a few weeks. But this large group experience inspired him to apply to be a Worship Team leader, a role he served in all four years at NAU.

Later that same year, JD was invited to the Native InterVarsity Would Jesus Eat Frybread? conference to explore his heritage as a member of the Piipaash and Quechan tribes of the southwestern US. He agreed to go but felt a little uncertain, as he remembered one pastor’s warning that culture couldn’t blend with faith.

The conference proved to be just as moving as his first large group, especially when a group of Native Hawaiians performed a hula. “I remember being invited into that moment,” JD said. “That was so memorable for me to see Indigenous people being gracious with their culture, that Jesus gives us an ability to offer an invitation, and that there’s a way to honorably engage with culture. That was something that I immediately began to want for myself, something that I’d never thought about before.”

JD’s four years with InterVarsity continued to help him grow in his appreciation for multiethnic worship and explore the connection between his faith and Native heritage. He also had the opportunity to perform through spoken word and song at InterVarsity’s Ambition Conference in January 2018.

Upon graduation, JD decided to pursue a Master of Fine Arts in creative writing at the Institute of American Indian Arts, with hopes of becoming a published author and teacher. But he also began to experience what he later called “a dry season,” during which he felt like expressions of Christianity revolved too much around Sunday morning corporate worship and prayer and then were neglected the rest of the week.

He reached out to Native InterVarsity Director Megan Krischke to discuss opportunities to continue serving with InterVarsity. This led to his decision to help plan the upcoming Would Jesus Eat Frybread? conference in November 2019. Struck also by John the Baptist’s example in Scripture, JD sought to prepare the way for a movement of the Spirit by prayer walking four campuses, including Coconino Community College. He plans to return to Coconino to continue building relationships with Native students.

“Volunteering has been really affirming that God is active in my life,” JD said. “In the midst of this dry season, I had this conversation with Megan. I just felt like God was hearing me, saying, ‘I want to use you, even though you’re feeling dry and burned out. Would you just come to me and be replenished and trust that I know what I’m doing with your life?’”

In many ways, JD’s volunteering experience has helped address his disappointment in not sensing the call to join InterVarsity staff after college. “I think I needed to understand that whatever I was planning to do after college, God was going to be in that,” he said. “The world needs more writers, more teachers, who are not just Christians but who believe in the things God cares about. The fabric of our society is strengthened by the type of people that InterVarsity impacts during their college experience.”

JD encourages fellow alumni, “God begins a work in us through InterVarsity in college, and it doesn’t end when you graduate. In this longstanding partnership between chapters and alumni, there are only beneficial things that come from that.”

Like JD, do you long for a way to continue serving college campuses? Consider prayer walking a campus as part of our EveryCampus initiative, a partnership of multiple ministries to launch movements and communities of Christians sharing the real hope of Jesus on every campus in the country. Click below to find a campus to prayer walk near you!