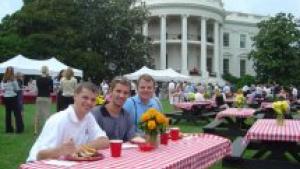 North Carolina Congressman Mike McIntyre has been recognized by the Center for Christian Statesmanship for his service to his constituents, his country, and his Savior. Congressman McIntyre, a Democrat, received the Distinguished Christian Statesman of the Year for “his character, leadership, integrity, and faithfulness in public service.”

The Distinguished Christian Statesman Award was presented in a Capitol Hill ceremony on Tuesday, May 16th. The presentation was made by Dr. D. James Kennedy, of Coral Ridge Ministries, founder of the Center for Christian Statesmanship.

In a statement provided by his office, Congressman McIntyre said, “Public service involves a commitment of faith, family, friends, and community. During my service in Congress, I have been truly blessed to have those cornerstones of support, and I am grateful for the ministry of the Center for Christian Statesmanship. ”

In a profile in InterVarsity’s 2003-2004 annual report, Congressman McIntyre said that his involvement in the InterVarsity chapter at the University of North Carolina—Chapel Hill shaped his life and his career in law and politics.

"I knew in my heart that I had a calling in public service, politics and government, and law. I knew that that was a mission field because not a lot of my friends, or other Christians, were involved in those areas. Through InterVarsity I was encouraged to develop as a whole person and to let my faith impact whatever career I was being called to."

In a congratulatory letter to Congressman McIntyre, InterVarsity president Alec Hill stated, “ Your good character, which was evident during your student days at the University of North Carolina, contributed greatly to the growth and maturity of the InterVarsity chapter on campus, and has since then shown the ways of God to people in many walks of life.”