In a journey only God could design, InterVarsity alumni Joe and Sheila Fell are living in urban Cleveland, bringing God’s hope and light to their community through legal advice and education.

Sheila and Joe both began their freshman year at Case Western Reserve University and at the InterVarsity group on campus there as brand new Christians, unsure or even unaware of concepts like “discerning God’s will for your life” and “listening to God.” But by the time they each graduated, five years apart, both sensed God calling them to work in an urban, multiethnic setting.

“Race relations . . . was a big passion I developed through InterVarsity,” Sheila said. During the fall of her sophomore year, the InterVarsity leadership team, which Sheila was a part of, sensed that God was calling their chapter to reach out to African American students on campus. “We wanted a truly diverse community,” Sheila said, “where we could have candid conversation.”

Initially, however, intentionally pursuing one ethnic group sounded patronizing to Sheila; “I believed in the colorblind mentality,” she said. As the leadership team read and studied various resources, however, her eyes were opened. “Not only did it help me understand the importance of being color-conscious,” she said, “it also helped me be more aware of my own Iranian American, Irish American background.” By her junior year, Sheila knew that God was calling her not to the sciences she’d been studying, but to social work.

God was speaking to Joe about vocation as well. “When I did [my] student teaching,” Joe said, “I felt God really strongly saying to me, ‘You’ve been blessed with great education; you need to use these gifts and talents to help out the less fortunate in Cleveland.’” He therefore limited his post-college job search to positions at urban schools and landed a job at an urban charter school in Cleveland for students who’d been unable to succeed in public schools. Being in the minority as a white male and learning how to help students from low-income families succeed were new experiences for Joe, ones he embraced as part of God’s calling on his life.

When Sheila graduated, the couple married and then both ended up pursuing the law degrees their parents had wanted them to get—no easy task for Sheila, in particular. “I didn’t like the adversarial approach because I’m naturally more of a mediator who likes to create peace,” she said. Even once she finished law school, she lacked confidence and was tentative about offering legal aid.

But God had plans for her and Joe’s law degrees, even as Joe continued to work in education. People in their community were continually asking them for legal advice—so much so that the couple eventually opened their own small legal clinic to help low-income families in the area. 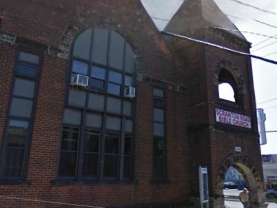 God didn’t stop there, though. Joe and Sheila were also giving legal advice to people who came for help to the faith-based nonprofit they were both working for, Scranton Road Ministries CDC (SRMCDC), a ministry of Scranton Road Bible Church. One refugee family’s case became the turning point for Sheila in really trusting that God could use—and was using—her legal knowledge.

Half of the family’s apartment had ongoing water damage and was covered in mold, but the landlord refused to fix the problem. Sheila agreed to help them, and within minutes of her clear citation of the family’s legal rights in a mediation session with the landlord, the case was settled, with the family getting back some of their rent money and being placed in a new apartment. The justice that was done opened Sheila’s eyes even more to the good she could do with her law degree.

In January of 2012, the Lord led Joe and Sheila to initiate a new program in SRMCDC’s ministry: the Scranton Road Legal Clinic, headed by Sheila. Today she and other volunteers offer workshops and advice for people who come in, empowering them to represent themselves in court (which Sheila said people do amazingly well).

But the help doesn’t stop with advice and instruction in the law. “In every legal case, there’s a lack of peace,” Sheila explained. “Damage and broken situations still remain even once family situations are resolved. . . . So we also provide people with a support network that can include prayer, encouragement, counseling, and financial counseling. We really want to be about helping the individual and family in a holistic way.”

Though Joe does do legal work through their practice and through Scranton Road’s Legal Clinic, his primary focus continues to be education. He presently works as the Program Director for SRMCDC’s Youth Jobs Partnership (YJP) Program, which places volunteers in high schools during the school day to help students learn practical skills such as job training, resumé writing, conflict resolution and teamwork, and setting and meeting goals. “We’re really blessed to have the opportunity to work closely with metro Cleveland schools, and to have that kind of access and favor,” he said.

Students can also choose to be part of YJP’s After-School Mentoring Program, which meets once a week at a local church. There students receive more advanced employment-readiness and character-building training. The after-school program also provides students with the opportunity to trust in Jesus and be discipled by caring Christians, which many students in the program eagerly choose.

Joe and Sheila both point to the crucial ways InterVarsity prepared them for their current ministry. Joe said he’s particularly grateful for the leadership opportunities he had in InterVarsity as a student. “You learn the types of things God has equipped you to be good at,” he said. “InterVarsity helped equip us to be effective leaders in the church. The ministry I do now—a lot of that comes from the training and development I received when I was in InterVarsity.”

For Sheila, InterVarsity’s focus on God’s redemption of the world, and on the ways he’s bringing his kingdom to earth, really stood out in college. It’s clearly a value that’s at play in both her and Joe as they love and serve and learn from their urban community.

“This work can be really draining,” she admitted, “but God shows me a lot that he brought us here, he made us in his image, to help bring his kingdom in this work. As difficult as that is, it really is the only fulfillment we can find—unifying our work to his purpose. He gives us this life as an opportunity and privilege to serve him and play a part in bringing his kingdom back”—a privilege Joe and Sheila are still embracing strongly in their post-college years.