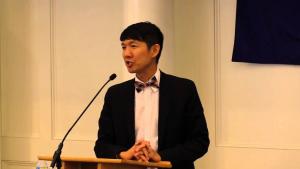 Michael Oh faced two huge obstacles on his road to becoming a missionary and a seminary president in Nagoya, Japan. One was Japan’s legacy of imperialism in East Asia during the twentieth century. The other was the American Dream. But without either, he would not be where he is today.

His Korean family’s Christian roots go back five generations to the early twentieth century; they were among the first Korean converts to Christianity. But when his father was born, Korea was under Japanese occupation. His father was given a Japanese name and was beaten when he spoke Korean.

As a grad student, studying anthropology and Japanese history, Michael discovered that the tensions he had felt in his family toward the Japanese were part of a much larger history. Japanese imperialism caused suffering that claimed millions of victims all over East Asia. One historian has calculated that as many as 30 million Koreans, Chinese, Vietnamese, Filipinos, Cambodians, Indonesians, and others were slaughtered before and during WWII.

“As I learned that, the anger of the Korean people became my own,” he said as he gave his testimony at Urbana 09, InterVarsity’s student missions conference. “That anger threatened the ministry that the Lord had called me to lead in Japan.”

It was only after the Lord reminded him of the depths of his own sinful nature and the price that had been paid on the cross to redeem him that he was freed from that anger. “I knew then that I could claim no human right to hate or accuse another,” he said.

Michael’s parents emigrated to the U.S. in 1970 to pursue the American Dream. They worked hard and reaped the rewards, as many immigrant families have done. They made sure that Michael and his sister had every opportunity. But pursuing the American dream also had a price, Michael and his sister did not see much of their father. “Up through my toddler years I hardly knew him,” he said.

At the University of Pennsylvania Michael got involved with InterVarsity, attended Urbana 90, participated in evangelism and missions projects, and became a leader of the chapter. By the time he was a senior, he felt God calling him to the mission field. But when he told this to his father, after church one Sunday afternoon, his father said, “no.”

Michael’s father told him that he wanted to look forward to more family time together, and in particular quality time with his grandchildren. Michael thanked his father for all of his sacrifices, but he said that he could not turn his back on God’s call.

Michael’s father eventually accepted Michael’s decision. Today he supports Michael in his ministry, as well as Michael’s sister, who is also preparing for the mission field with her husband.

“My father had an independent spirit, and he understood that if he would do such a radical thing in leaving Asia to come to America to pursue earthly dreams, how much more so does he need to allow God to do what God would do, to allow his son to return to Asia to follow the dream to share the gospel of Jesus Christ,” Michael said.

Michael and his wife completed their schooling and moved to Japan in January of 2004, after serving as short-term missionaries there several years earlier. In this largely un-evangelized country, where Christians make up less than one quarter of one percent of the population, they had discovered that the biggest need was for a good seminary to train young leaders. Christ Bible Seminary opened in Nagoya in April, 2005.

“I had no interest or calling to theological education necessarily, but I wanted to do what could be most effective,” Michael said. He also pastors a church in Nagoya and has begun preparing to plant churches and other ministries in other parts of Japan.

One of his biggest concerns is Japan’s young people, and providing safe space for them to grow up. “Japanese society for young people is predatory,” he said. “There are 30,000 suicides per year. There’s lots of bullying. And Japan is one of the few societies where possession of child pornography is legal.”

Looking back, Michael realized that one of the most important steps in his entire life was connecting with InterVarsity’s ministry during his first week on campus at the University of Pennsylvania. “It was a lifeline for me,” he said. “It was the single dynamic that God used to prevent me from falling into any number of pits that I was wired to fall into, such as the pursuit of wealth and power, sexual temptation, and the idolatry of intellectual pursuit.”

Update: Leading the Next Generation

Today Michael is pursuing a dream that is much larger than the American Dream of personal fulfillment. After several years of pursuing a dream of peace and reconciliation for the Japanese people through the gospel of Jesus Christ with Christ Bible Institute, Michael was named the Executive Director/CEO of the Lausanne Movement, where he'll lead the organization as they mobilizes evangelical leaders to collaborate for world evangelization.