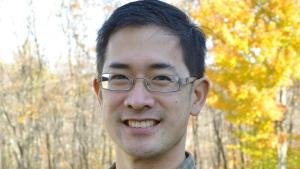 The relationship between God the Father, God the Son, and God the Holy Spirit—the Trinity—is a mystery that most of us will never come close to fully understanding. But the Trinity does show us something very clearly—community is at the center of the universe.

InterVarsity alumnus Michael Tso has been captivated by the mystery and beauty of the Trinity, “not so much as a doctrine, but as a way of living in community.” In a variety of places, times, and careers, Michael has placed true community—messy and difficult yet crucial—at the center of his life, and seen the ways it has transformed his life and the lives of those around him.

Michael spent his undergraduate years at Brown University, and the InterVarsity chapter there was the first place where he recognized that Christian community could have a transformative impact. After he joined during his freshman year, Michael experienced the presence of God in a new, more tangible way than he had ever felt before. As a sophomore and junior, he led Bible studies, where he learned how to invest in others.

During his senior year, he felt led to start a Group Investigating God (GIG), where non-Christians who were interested in exploring the Bible could ask questions and discover who Jesus was through the Scriptures. “That year, I saw 12 people come to know the Lord, both in my GIG and elsewhere,” said Michael.

InterVarsity also had a major impact on Michael through the Urbana Student Missions Conference, which he attended in 1987 and 1990. It was at Urbana that Michael heard a call from God to missions, which he accepted with fear and excitement.

In Search of a Mission Field

Michael was drawn to mainland China as a mission field, and he planned the rest of his education accordingly. “At that time, one of the few ways to enter China was as a medical doctor,” Michael said. He started medical school and made it all the way through residency before a blow fell on his well-laid plans.

“I was praying about whether or not my wife and I should go to China, and I heard very clearly from God that we were not supposed to go,” said Michael. “It was a hard thing to deal with—I had chosen this profession solely to go to China, and now we weren’t going to go.” Michael knew that God wanted him to stay in the United States, but he wasn’t sure why.

As Michael and his family continued their life in Portland, Oregon, they began to recognize and implement the importance of incarnational living. The family started a Bible study in their neighborhood, reached out to those in the area who were homeless, and rooted themselves in the lives of the people around them.

Michael was committed to living a missional life despite staying in the United States. “I felt like it was important for our kids to get a sense of mission, so we decided to do a family service project,” he said. They headed to His Mansion Ministries, a Christian recovery community forty minutes northwest of Manchester, New Hampshire, to volunteer for five days.

While there, Michael and his wife independently heard God calling them to live and work there as full-time staff.  After some discussion with the other staff, Michael took a position at His Mansion as Director of Training. Although it was difficult to pull up their strong roots in their Portland neighborhood, the family recognized that God was leading them to a new kind of community—one with a unique impact on the lives of its members.

A Place to Heal

Michael describes His Mansion as a center with a “whole-life approach to healing.” It’s a place for 18- to 35-year-olds with “a broad range of brokenness”—everything from addictions to eating disorders to trauma from past abuse. Wounded people come to His Mansion, a 360-acre working farm, for a year and spend that time regaining wholeness in various ways. In addition to group and individual counseling and treatment, residents study Scripture together, participate in daily midday worship, and attend church onsite together each week. There is also an educational component, where residents learn about healthy behavior patterns and other ways to grow and develop in character.

The work of the farm is also done by the residents, who help chop the wood, harvest and prepare the food, and work the grounds on a rotating schedule. “By giving the residents a chance to do the work the farm needs, we’re helping them see that they can contribute,” Michael said. “His Mansion helps them rebuild their sense of self, helps them understand their own brokenness and how the Lord can heal them.”

Change for the Better

Life at His Mansion is both rewarding and challenging. “We’re all imperfect, and that makes community hard,” said Michael. “It’s important to build community, but it’s not easy.” Since His Mansion is a place for hurting and broken people, the staff there often witness a considerable amount of suffering.

Sometimes residents make the decision to leave before the program is up, a decision which is painful to the whole community. And of course, there are the disagreements, tensions, and misunderstandings that are found whenever people live together.

But Michael has also seen the amazing, transformative power of God’s love in people’s hearts at His Mansion: “It’s remarkable to see someone who has been destroyed by pain and brokenness and sin, and then see God redeem all that and transform them.”

Many His Mansion residents make serious changes for the better during their time in the community, and because of this, Michael is able to experience them not only at their worst, but also at their best. “As individuals, we don’t always get to see how Jesus changes someone’s heart—I’ve been privileged to witness the power of the Gospel at His Mansion,” Michael said.

His Mansion has not only been transformative for its residents—it has also reinvigorated Michael’s vision of who God is. “Nothing will change your life and challenge you more than to walk with those who are really hurting,” said Michael. “If you want to be close to the heart of God, be with hurting and broken people.”

- If you’d like to learn more about short-term volunteer service at His Mansion, you can find out more here.