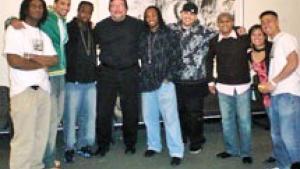 Every year for at least ten years the InterVarsity chapter at Baruch College, the City University of New York, hosts a campus concert called “Live @ Baruch.” It offers students an introduction to Christianity from a different perspective.

The music this year came from a reggae group, K.O.T.I.J. Crew, and a rap group, Frontlynaz. The program also featured a testimony from Ted Dibiase, who used to go by the name Million Dollar Man when he was a star in World Wrestling Entertainment.

“Despite reaching the pinnacle of his career, DiBiase related the emptiness he experienced as his family and personal life fell apart. The destructive path of his life took a positive turn only after he put his faith in God,” reported The Ticker, Baruch’s newspaper.

The April 13th event was promoted under the theme All That Glitters Ain’t Gold, a phrase that is familiar to fans of hip hop music, as well as readers of Shakespeare. The newspaper report on the event was positive and concluded, “With a strong sense of community in the air, many friendships were built that evening.”

Ministry at Baruch has unique challenges. It is a commuter school, so most students travel for an hour or more to get to campus. It’s also one of the most ethnically diverse campuses in the U.S.

Sophia Gaboury, the InterVarsity campus staff member at Baruch, reports that the outreach reflects an increased commitment by InterVarsity in the New York City area to partner with local churches and engage the culture.

And it paid off. Sophia reports that ten students responded when an invitation to faith in Jesus Christ was given at the end of the evening by pastor Stan Thomas from the Gallery Church. Chapter members are now following up with the students.

Evangelism currents are running strong at Baruch right now. More than 50 students came to faith in Jesus Christ through an outreach by the Korean Christian Fellowship. The fellowship is partnering with the InterVarsity chapter to follow-up the new converts.

You can make a direct financial donation to support InterVarsity’s work on the Baruch College campus by following this link.