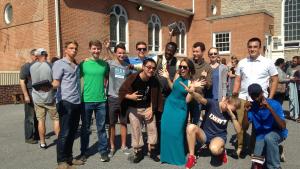 When the Dickinson College InterVarsity chapter solicited questions about God, in exchange for a grilled cheese sandwich, freshman Bennett Briante was curious.

“Doesn’t your religion depend on where you were born?” He thought.

Bennett got the sandwich and an answer to his question. He signed up to get more information about InterVarsity, but every time Campus Staff Minister Andrew Berg invited him to the chapter’s activities, Bennett was no longer interested.

What Bennett was interested in was the party scene at Dickinson. He spent his time partying and hanging out with his baseball teammate Chris.

Then, on Halloween, Chris got in trouble. He had his ROTC scholarship revoked and dropped out.

A Friend that Changed His Life

The next April, Chris came back to visit the campus, and Bennett was surprised at how much he had changed.

“The last time I had seen him he had been in a very low place,” Bennett recalled. “Six months later, seeing him in the most incredible, peaceful, happy state, I said, ‘Chris, what happened?’ and he explained to me about God and Jesus. And I said, ‘I want that.’”

That summer Bennett stayed with Chris for a month. His time with him confirmed that he wanted to follow Jesus himself.

When Bennett arrived back on campus to start his sophomore year, he knew he had to make some changes, but he wasn’t sure how. Then he discovered that he still had Andrew’s number on his phone.

This time, Bennett responded to Andrew’s invitations and plugged into InterVarsity, and by his junior year, he was a member of the leadership team. He led prayer events, shared his faith with his friends, and also, ironically, led the grilled cheese outreach that first introduced him to InterVarsity.

In his senior year Bennett signed up to go to Fall Conference for the first time, after avoiding it for two years.

“This fall, I really felt the Holy Spirit say, ‘You should go to this one.’ I did, and by God’s grace this amazing thing happened.”

Bennett found himself in a small group at Fall Conference that included a student from Penn State Mont Alto named Carlos, who wasn’t a believer. Reminded of where he was himself a couple of years earlier, Bennett invited Carlos on a hike where he made his own decision to follw Jesus.

Bennett looks back to where he was two-and-a-half years ago. People that knew him back then even refer to when he was the "Old Bennett" verses now as the "New Bennett".

“InterVarsity created a friendly environment, allowing me to meet Christians and have friendships with them for the first time," Bennett said. "It’s so incredible what has transpired over the past three years and how rapidly my faith has grown, and how rapidly my life has changed. The things that I used to do I don’t do any longer. It’s been a total 180. Everything has changed.”

InterVarsity wants to see more students, like Bennett, hear about the good new of Jesus and experience his love for them. But more than half of the college campuses in our country don't have a witnessing community of Christians. That's why God has given us the 2030 Calling, to reach every corner of every campus. You can be a part of it by giving a generous gift to InterVarsity. Click the button below for more information.