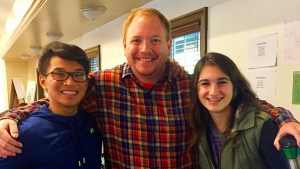 Carlos Vera was well known as an atheist on the Penn State Mont Alto campus. He thought Christianity was for people who were unable to handle the challenges of life by themselves and needed to believe in another being—one that didn’t exist.

He also had questions about God that no one seemed to be able to answer for him.

But shortly after he arrived on campus Carlos met Rachel, a Christian who wasn’t shy about throwing his questions back at him. They frequently bantered about philosophical issues and both enjoyed learning each other’s views.

“We clashed on a lot of ideas,” Carlos said. “But she continually invited me to [InterVarsity] events. She invited me everywhere.”

At first, going with Rachel to a Bible study or to church didn’t sound very interesting, and he ducked the invitations. But as Carlos struggled with the rigors of college, he also realized that Rachel was a good friend who he liked hanging out with, so he began to take her invitations more seriously.

When Rachel invited Carlos to InterVarsity’s Fall Conference, a weekend retreat away from campus, he thought, Why not?

At the retreat, Rachel and Carlos ended up in a small group with Bennett, a senior from Dickinson College, who had come to faith several years earlier through the influence of his best friend. Nudged by the Holy Spirit, Bennett invited Carlos to go on a hike during their free time.

As they hiked for over two hours, Carlos shared about his doubts and how no one had ever been able to answer his questions about God and Christianity. Bennett tried his best to answer Carlos' questions and told his own story of how he started following Jesus.

Bennett's story about his journey to faith struck Carlos and felt relatable to him.

At the end of their hike, Bennett asked, “Carlos, what do you think is the next step for you in exploring faith?”

“I feel ready to choose: I want to follow Jesus,” Carlos answered.

Carlos read his Bible voraciously for the rest of the fall semester. He dropped a lot of his bad habits and spent more time with his new InterVarsity friends.

“The idea of an omnipotent, omniscient, benevolent God did not fit with my worldview, so I rejected it harshly,” he reflected. “InterVarsity taught me that the secret to life is not really a secret. It’s truth that is available to everyone.”

As the spring semester began, the first assignment in Carlos’s communication class was to give a speech about something he used to believe in but changed his mind about. It was an easy assignment.

“I was an atheist for a good 18 years. But now I’m Christian,” Carlos said during his talk.

Just like Carlos, InterVarsity wants to see more students who don't know Jesus experience his real hope and decide to follow him. You can help make that happen by giving a generous gift to InterVarsity. Click the button below for more information.