A New View of Community 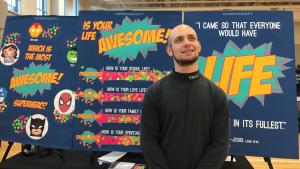 When Josh Howard started college at Radford University in Virginia in the fall of 2016, he fully intended to find a Christian group on campus where he could grow spiritually. After experiencing hardship in high school that caused him to doubt the faith he’d been raised in, he’d come to a place of deeper faith before beginning his freshman year of college, and was ready to understand what he believed more deeply.

“I felt like, Okay, now that I’m becoming an adult I need to really learn more and get around people who are Christians,” he said.

But one bad experience with a Christian group during his first few weeks of college left a sour taste in his mouth.

“I gave up on it,” he explained. “I had my church family, but I [realized] I don’t really like the way a lot of groups act. My sophomore year I didn’t go to any groups.”

In the summer of 2017, however, Josh felt convicted of the need to find Christian community.

“I started deciding that I really need to make my faith an important part of my life,” he said.

“I met up with her and told her I was interested,” he recalled. “I went to that small group one of the first few weeks of the fall semester, and I’ve been going to InterVarsity ever since. Right away I really liked it!”

By the beginning of the next spring semester, Josh led a second Bible study for the small InterVarsity plant on campus. His view of Christian community also drastically shifted.

“For the longest time, I would get annoyed by people sometimes, or just want to do my own thing. Even my first couple years of college, I didn’t have that many friends, and I didn’t really want to make a whole lot of friends,” he reflected. “But I know in the Bible God calls us to come together as Christians and learn from each other. I knew I needed to get more involved in other people’s lives. And I think just being with InterVarsity and having people I can be honest with, and the ways we learn from each other, has really shaped my understanding of how important community is.”

Wanting to Give Others the Same Experience

Being part of InterVarsity also gives Josh more opportunities to do one of his favorite things: share about Jesus with others. The Radford chapter did a Proxe Station—an interactive art display designed to lead people into spiritual conversations— on campus and plans to do another one soon.

Josh said, “One of the biggest things I’ve learned from InterVarsity is that people do want to learn more about spirituality even though it might not seem that way sometimes. It’s a lot easier to have spiritual conversations than I ever thought it would be before.”

His desire as he starts his senior year in the fall is that more Radford students would get to experience the love of Jesus and the community he’s found through InterVarsity.

“I really love having friends I can talk with about Jesus. And I have several new friends that I’ve made who are learning a lot about God who maybe didn’t think about religion too much before,” he said. “There are lots of people that need to hear the gospel at Radford, so I think InterVarsity is a great way for people to learn more about who Jesus is and how we can experience him together.”

InterVarsity provides welcoming, witnessing communities where students can study the Bible and experience the real hope of Jesus and what it means to follow him. You can help create these spaces for students like Josh by giving to InterVarsity. Click the button below to learn more.

Give to Bring Real Hope to Campuses