75 Years of Witness on Campus 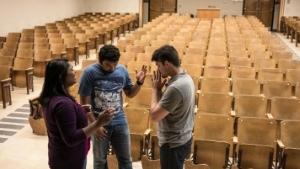 InterVarsity Christian Fellowship officially began our campus ministry in the United States on November 14, 1941, the day we were incorporated. Campus fellowships had already been active at several U.S. colleges for a few years, however.

In 1941 InterVarsity’s founder, Stacey Woods, directed a three-person staff, operating out of a Chicago office that was shared with the Christian Workers Foundation. Today, 75 years later, InterVarsity’s national office is in Madison, Wisconsin, and staff workers and volunteers across the U.S. total more than 2,000. InterVarsity has 1,011 chapters on 667 U.S. college campuses, working with more than 40,000 core students and faculty.

“We are currently experiencing one of the most stimulating periods in our history,” said current InterVarsity president Tom Lin. “The number of students and faculty coming to faith in Jesus Christ through InterVarsity has doubled over the past 10 years. At the same time, we are experiencing more challenges to our work on campus than in any time in recent memory.”

The vibrancy of InterVarsity’s current ministry stems in part from new specialized outreaches to athletes, arts students, and fraternity and sorority members as well as to ethnic minority groups and international students, as InterVarsity seeks to share the good news about Jesus with every campus community. InterVarsity’s 2015-2016 Annual Report highlights the ways that InterVarsity staff and student leaders are trying to reach every corner of one specific campus: University of California, Santa Barbara.

While we are using innovative new methods to communicate with students, such as interactive mobile art displays called Proxe Stations, the mainstays of campus ministry continue to be small group inductive Bible studies, daily prayer meetings, and weekend retreats. InterVarsity alumni can be found living out their faith on NBA basketball courts, in outer space, in scientific research laboratories, as CEOs, as hip hop artists, in school classrooms, on the mission field, and in a myriad of other careers.

InterVarsity has shaped the lives of students in other ways. In 1946 InterVarsity hosted a conference in Toronto, Canada, initiating what has become the triennial Urbana Student Missions Conference. Urbana was based on the University of Illinois campus for most of its history, moving to St. Louis, Missouri, in 2006. Hundreds of thousands of students have attended an Urbana conference, with many responding to the call to dedicate their lives to God’s global mission.

Christians of all ages have also been influenced by InterVarsity Press books. Currently there are more than 1,700 IVP titles in print, and IVP is known as a leader in the industry for publishing thoughtful Christian books. IVP books consistently win recognition among the top books in Christian publishing.

“The vision of InterVarsity is to see students and faculty transformed, campuses renewed, and world changers developed,” Lin said. “We believe the most impactful Christian witness we can have is to the future world leaders who are now students on our college campuses.”