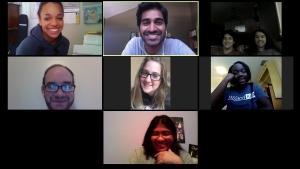 In the early days of InterVarsity, field staff itinerated from campus to campus by train; they were assigned to regions, not campuses. In order to reach every corner of every campus, a goal to which InterVarsity aspires, we may be returning to a semblance of those days with staff once again mentoring student leaders on a number of campuses.

In fact, it’s already starting. But instead of trains, staff use Zoom and Google Hangouts.

Zoom is a California-based company that offers remote video conferencing services. In the last few years InterVarsity staff have been using Zoom more and more to hold virtual staff meetings with colleagues across the country. Arul Karunanidhi, an InterVarsity Campus Staff Minister in Florida, wondered, “Why can’t it work with students?”

Arul discovered InterVarsity as a sophomore at the University of Central Florida (UCF) and joined InterVarsity staff at UCF upon graduation. Three years ago, he began to visit nearby campuses that didn’t have an InterVarsity chapter. “That was a big part of my heart, to do ministry with students who don’t have a witnessing community or don’t have access to the gospel,” he said.

Working with his staff supervisor, he created the position of “itinerant planter.” His first-year goal was to work on three campuses in Orlando. But then God started opening doors not only in Orlando but also in nearby Lakeland. Arul was making connections through students who wanted InterVarsity on campus, or an alumnus who knew a Christian student on a campus, or a Christian faculty member who had an InterVarsity connection.

By the end of the year two chapters had been established and two more had active ministry. And Arul had a vision for planting 10 more chapters on 10 new campuses in three years. “God’s been opening doors and now I’m working on nine campuses; we planted InterVarsity on seven of them,” he said.

Zoom was an experiment at first; it seemed like it might work with student leaders as well as InterVarsity staff. But has turned out to be a critical component. Orlando is a big, spread-out city and Lakeland is a 90-minute drive away. “There was no way I could meet with people face to face and still have any other life,” he said. “But now I can do Scripture studies with them, I can do training, I can debrief events, all through Zoom.”

At one media-focused school, students changed schedules every month and finding a time for Christian students to all meet in person was nearly impossible. “Let’s try things over Zoom and see what happens,” Arul said. Now the students are doing video conference Bible studies together. “It feels completely natural for them,” he added. After all, the students are already used to a lot of screen time on their smart phones and through online courses. 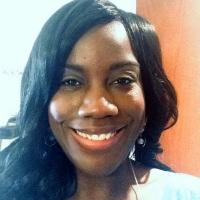 NaKhia Grays, Black Campus Ministry (BCM) coordinator for the Mid-Atlantic Region, faced a similar dilemma. After becoming involved in InterVarsity as a student at Bucknell University, she joined staff as a volunteer in 2001, and became a full-time staff member two years later. When she transitioned to part-time with the arrival of her baby, NaKhia wanted to keep mentoring students who were initiating BCM small groups in Maryland, D.C., Pennsylvania, and Delaware. So she began a monthly Google Hangout video conference. “I was trying to streamline my work and figure out the best way to influence the most student leaders with the least amount of time,” she said.

The first Hangouts were early in 2016. After maternity leave she resumed Hangouts again in February of 2017, following the Black Student Leadership Conference, RELEASE. Within another month, two of the students had started a BCM small group on their campus. “Who launches anything in March of the school year?” NaKhia laughed. “The students were either eager to create a space on their campus that hasn’t been there or they experienced something at the BCM conference that they wanted to replicate on their campus.”

The students share prayer requests and pray for each other during the call. NaKhia teaches about leadership and other relevant topics, fields questions, and then they close in prayer. “The students get to know each other pretty well,” she said. They are encouraged to be connecting with others like themselves on other campuses.

Arul found the same response. “We were creating a community across campuses,” he said. “It really felt like the original InterVarsity—a Christian fellowship between the universities.”*

Arul’s hope is that each campus represented on his calls will eventually have their own staff person—perhaps one of the students he’s now mentoring by video, so that a sustainable ministry can start at each school. “They just need vision, support, and coaching,” he said.

In the Mid-Atlantic region, NaKhia is hoping to see Black Campus Ministry continue to flourish through Bible studies and BCM chapters. Some of the students NaKhia has been coaching have become accountability partners to strengthen their faith. Long-term relationships are being built.

This year, Florida classes and scheduled events were thrown off schedule by Hurricane Irma, which moved through the state near the start of the semester. But Arul found that getting his students back on track was helped by the video conference connection.

It looks like video conference coaching will be keeping InterVarsity on track for years to come.

*See how InterVarsity got its name on our history page.