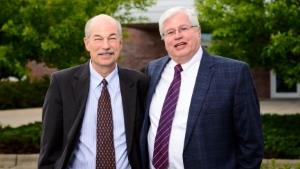 Jim Lundgren, InterVarsity’s interim president, is pleased to announce that Alec Hill returned to work on February 1st in a new role — president emeritus. The return comes fifteen years to the day since Alec was first announced as president in 2001.

Alec announced his decision to leave office last May in order to begin cancer treatments in Seattle. He received a successful bone marrow transplant from his brother on August 15, 2015.

“Alec’s recovery process will allow him to work by email, phone, and video conference,” Jim announced. “Due to risk of infection, his doctors recommend no travel and limited face-to-face contact until this fall. We celebrate God’s goodness in Alec’s healing process and welcome Alec back to work.”

As president emeritus, Alec’s responsibilities will include:

“Mary and I are deeply thankful for the support we’ve received from so many friends over the past nine months,” Alec said. “In the Lord’s providence, it appears that my life has been spared. To be able to contribute to the Fellowship once again is incredible.”

InterVarsity’s board of trustees continues the search selection process for a new InterVarsity president. A decision is anticipated later in 2016.