Ambition Is Shaping the Future of InterVarsity 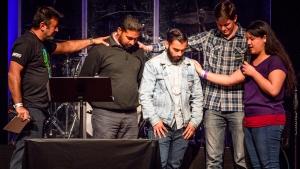 InterVarsity’s 2018 Ambition conference was called to inspire, equip, and release students and faculty to plant witnessing communities in every corner of every campus. The conference drew 700 students and 300 staff, plus faculty members, church partners, and other guests, to the House of Blues in Anaheim, California, in mid-January.

Efrem Smith, pastor of Bayside Church in Sacramento, California, and former CEO of World Impact, an inner-city church planting movement, told the attendees that reaching out to new communities is not just about reaching more people. “Planting is a revolution,” he said, and challenged them to plant with revolutionary compassion, like Jesus, and with revolutionary authority.

On the final morning of the conference, longtime southern California staff members Beau and Kristina Crosetto announced that they were moving in 2018 to replant InterVarsity chapters on campuses in Louisiana. They were followed by InterVarsity Executive Vice President, Field Ministry, Jason Thomas and Mark Gauthier, Vice President and Executive Director of Campus Ministry for Cru, who talked about how God had led both organizations together to partner on a new website, http://everycampus.us/. The website’s goal is to create more partnerships in order to see that every U.S. college campus is reached with the gospel.

Ambition Director Shawn Young, InterVarsity’s National Director of Chapter Planting, invited InterVarsity staff leaders to speak at Ambition, but also students. “Students are speaking to our movement in powerful ways; it's not just our staff trying to speak to the next generation of our students,” he said. “It’s not just that students have good stories to tell and that their testimonies are important. They actually have important challenges, exhortation, and encouraging words.”

Students came from across the country to attend Ambition, including three students from Pennsylvania, who said afterward:

For another student, Ashley, Ambition was about setting higher goals. “Don’t underestimate what God wants to do for you,” she said. And Al-Nisa said, “I’m learning to hear God for myself and not have to hear from somebody else.”

The conference demonstrated that InterVarsity is defining ourselves not by the number of campuses that we are on, but by the number of campuses that God is calling us to. He is inviting us to develop partnerships in ministry with more students, more churches, more alumni volunteers, and more like-minded organizations. Ambition is shaping our response to our 2030 Calling, to reach every corner of every campus by the year 2030.

Shawn said the conference has exceeded his hopes as it has steadily grown larger than each previous Ambition conference. “Everything we wanted to see in terms of empowering students and faculty to reach their campus and consider other campuses around the country is really coming true,” he said.

The seven general sessions of Ambition can be viewed at our YouTube channel. The Ambition conference is based on the words of the apostle Paul, “It has always been my ambition to preach the gospel where Christ was not known, so that I would not be building on someone else’s foundation” (Romans 15:20).