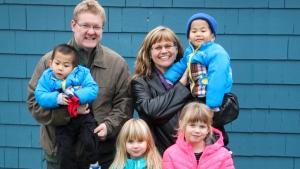 Julie Longacre was the only Marietta College InterVarsity student to attend Urbana 93, InterVarsity's triennial student missions conference, as far as she knows. She thought that God might be calling her to ministry overseas but she was hesitant. That is, until she introduced herself to the women in her small group at Urbana, and discovered that every one of them was from the same country she had been praying about in East Asia.

Julie turned to the lady sitting next to her, whom she did not know, and heard the woman say, “My name is Julie and I came to Urbana largely to determine whether or not God was calling me to teach English overseas for a year.” Julie laughed and said the exact same thing back to her. “It just felt like God’s fingerprints were all over that decision,” she recalled.

Julie went to East Asia and taught English for a year, returned to the U.S. and volunteered with InterVarsity for a year, then went back overseas for another year. She then worked for the Marietta College international students office for another four years before officially joining InterVarsity staff in 2001. Today she is the East Ohio area director. She and her husband, Jon, have four children—two of whom they adopted last year from China.

Jon also works for InterVarsity, as a regional administrator. Occasionally they get to work on projects together, such as the region’s fall conference for 2016. Julie is conference director and Jon is conference coordinator. Their ministry gifts complement each other well. “My joy of ministry went through the roof when Jon came on staff,” she said.

Seven chapters currently make up the East Ohio area, and one of the things Julie enjoys most is emphasizing the “inter” in InterVarsity. Once a month student leaders from all eight chapters gather in a central location on a Sunday evening for dinner and worship time.

“We call ourselves the East Ohio family, and it really does seem like a family,” she said. “All the staff I’m privileged to work with get to influence the students at all of our campuses.” This is especially helpful for ethnic minority students, who can seek out mentoring or prayer from ethnic minority staff who work at other campuses.

Regional director Fred Bailey says Julie’s eagerness to serve and to imagine the best in people in every situation are keys to her success on InterVarsity staff. “Julie’s enthusiasm, her warm affection for people and for kingdom values, and her ability to inspire student leaders are infectious and inspiring,” he said. “She’s also a strategic thinker who can help keep people moving forward.”

Marc Papai, InterVarsity’s International Student Ministry director and Julie’s former supervisor in Ohio, calls her an extremely gifted teammate. When the number of students committed to prayer doubled in Julie’s area, he noted it was a reflection of her leadership. In addition, each chapter in the region is growing, including the chapter that Julie replanted at her alma mater.

The East Ohio staff team has been thin the last few years. Julie is hoping the addition of new staff in the next couple years will allow their ministry to expand to new campuses, such as Stark State College in North Canton and Ohio University in Athens. At Stark State there is no campus ministry currently or even churches that advertise on campus. “We would love to get in there and offer something for students,” she said.

Insights into growth strategy that have been shared nationally with InterVarsity staff make her feel excited about possibilities. “Some of the things we’re learning about coaching, discipleship cycles, and apprentices will really make an impact in this region,” she said. “I want to see that happen.”

Julie’s career has been influenced by many people she has met along the way, but it would be hard to find anyone who has made more of an impact than Bill Buelow, the music professor who met with her when she visited Marietta College as a high school senior.

She had already made up her mind that she was going to attend a Christian college because she wanted to enter vocational ministry. As the faculty adviser for InterVarsity, who had been brought to faith through the witness of InterVarsity students, he pitched her on the idea of beginning her ministry training at Marietta through involvement with InterVarsity. She changed her mind.

Bill was actively involved with the chapter during all four of her years as an undergrad. She teamed up with him again when she returned later to work in Marietta’s international students office.

Many students came to faith through InterVarsity’s ministry at Marietta during those years, but Julie in particularly remembers two radical conversions of fellow music students during her freshman year. “It set the stage for a sense of anticipation that God was going to work in miraculous ways,” Julie said.

And indeed, God continues to work in miraculous ways on campuses in eastern Ohio, and across the U.S.