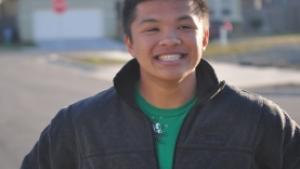 “Before college, I was really involved with my church. I was a leader in my youth group and was part of the worship team,” said Jorel Antilano. “But that didn’t mean a whole lot, as I was just going through the motions of being a ‘good’ Christian.”

Even though Jorel had grown up in the church, by the time he got to high school he was following people rather than God. He began partying and drinking, wanting to be like everyone else. And soon he was doubting if he was a real Christian.

“Coming to college really shook my faith. I was on the verge of walking away from my Christianity, when an InterVarsity staff worker asked me if I was thirsty,” stated Jorel. “I thought it was some party invitation, but to my surprise, it was an InterVarsity gathering—they were doing an evangelistic outreach using the What are you thirsty for? interactive art station.”

So Jorel joined InterVarsity at University of California, Merced, and he began to take responsibility for his faith. As the academic and social challenges of college life became more difficult for Jorel, he gave his life more to God and found that his relationship with God was growing.

Am I a Leader?

“At first leading a LaFe Bible study seemed like a daunting task, but what I have learned was that God works within culture and diversity,” said Jorel. “And it sparked a desire to start a Filipino small group on our campus and focus on reaching out to my Filipino brothers and sisters.”

Not only has Jorel matured  in his leadership abilities through leading Bible studies, he has also grown in his relationship with God through participating in one of InterVarsity’s two-week missions projects, the Sacramento Urban Plunge (SUP). The project invites students to learn about God’s heart for the poor through Scripture as well as inner-city issues, poverty, and how we as Christians can respond to systemic injustices specific to the inner city.

“Participating in SUP opened my eyes to how God was working in the inner city of Sacramento,” noted Jorel. “Also God transformed my heart to see homeless people as more than just homeless people, but to see them as God’s children—they have stories and a life worth sharing.”

“Because of my experience in SUP, I now see others as people who have been intentionally and wonderfully made by God,” stated Jorel. “This is an amazing perspective to have, and it has encouraged me to to become more outgoing and invest in people of all different backgrounds.”

What Is My Future?

As Jorel continues his education and looks for ways to share the love of Jesus with others, he also continues to look for opportunities to grow as a follower of Jesus and as a leader in society. At Urbana 12, he attended the Student Leaders Track to discern where God might lead him after college.