From Atheist to Chapter Planter 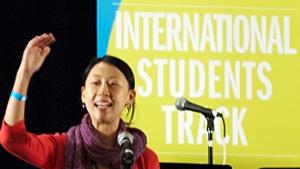 When Pranny Xie and her family moved to the United States from China, she had no interest in religion. A Buddhist grandmother and non-religious parents never impressed on her the importance of faith. When a friend invited her to come along to a meeting of International Christian Fellowship (ICF), Pranny initially turned it down. Out of a desire to avoid religion Pranny also avoided social situations until she was unable to stand feeling lonely and isolated anymore.

Finally, after six months of rejecting her friend’s invitations, Pranny attended an ICF meeting. She didn’t like the Bible study and wasn’t interested in the worship service, but she liked the people in the group. That kept her coming back. Their interest in her, their friendliness, and their love surrounded her. Pranny became curious about these people, and about Jesus.

While Pranny enjoyed spending time with ICF, she still wasn’t convinced about their faith. “I thought Christians were fake and that they were nice to me because they had some purpose for me," she said. Eventually she began meeting and talking with ICF staff worker, Eric Wu, about Christianity.

She confronted him directly with her doubts. She still remembers Eric’s answer, “Hey, Pranny. I’m a Christian and I feel blessed by having God in my life and I think it’s a great thing. So now I just want to share this blessing with you. Even though I have this purpose for you, do you think that’s bad?”

A New Journey of Faith

These conversations resonated with her. In 2007, one year after she started going to ICF, Pranny accepted Christ and began a new journey of faith. She met with her friend Angela every week to pray, growing in her devotion and trust in God. She learned more about her new faith in Bible studies of Mark's Gospel, saying they greatly impacted her spiritual growth.

Pranny visited a church and experienced the Spirit of God filling her – the first time she spoke in tongues she was overcome by the reality of God! The more she felt the presence of God the bolder she became in inviting classmates to attend church or studies with her.

One thing Pranny found helpful in discovering more of God was telling other people about Him. This caused her to reflect on God’s person and consider what He means to the world.

At a conference for Chinese Christians, Pranny learned more about obedience to God and how to effectively spend time with Him. She began to have a regular Quiet Time to build her relationship with God. She continued to meet weekly with both Angela and Eric, who discipled her during her time in school.

Eventually, Eric asked Pranny if she would consider going on InterVarsity staff after graduation. She was shocked! Staff was for the wise Christians, she thought, the ones who did everything at a high level, not for her.

After others continued to encourage her, Pranny decided to fill out an application. Almost immediately she began to be discouraged again. She felt more disqualified for the position with every page she filled out.

Then she felt God speaking to her one Sunday at church. Just as Jesus could feed 5,000 people with five loaves of bread and two fish, so too could He use her resources, no matter how small, to do His work. Pranny prayed that God would use her – and she was accepted on staff.

Before beginning her work on campus, Pranny needed to have 80% of her financial support raised, as is common with InterVarsity field staff. She knew that meeting students early would be vital in planting a new chapter, so her prayer request was to be fully funded by September when the students arrived on campus. However, international students coming from non-Christian backgrounds often find it difficult to develop enough partnerships, much less to do so quickly.

Building a Team for Campus Ministry

She began building her team in April, finding friends, co-workers, ICF alumni, and church members to pray for her. She sent weekly updates to her prayer team, informing them of her progress and her prayer requests. Pranny says her church was a great resource at this time, supporting her and covering her with their prayers. She met with Eric and the pastor of her church to practice development talks. She reached full funding in September, just before the students arrived.

Pranny began planting an ISM chapter at Cal Poly Pomona right away. Her first step was to take a walk around campus, praying for students and for the school year. She and her supervisor, Tim Hsieh, ran information tables at the beginning of the year, and she started a Bible study in the library during the first quarter.

Even with everything beginning well, Pranny had times where she felt underqualified for staff work. She was still a Chinese woman placed in American culture. Every so often she became frustrated with attempting to explain what she meant to others using a language still somewhat foreign to her. Sometimes she struggled with accepting her identity in contrast to those around her.

Transitioning from student to staff also required a pespective shift that didn’t always come naturally. As a student, Pranny would attend conferences intending to receive and be filled. Now she thinks about what the new students will receive and how it will impact them. She is also taking a greater role in leading and planning than she did before entering staff, which included speaking at the Urbana 12 International Students Track (listen to the audio of her talk.)

For the second quarter, the international chapter had a small team running the information tables and grew to two Bible studies meeting weekly. Pranny had invited students to her non-Christian study, but was struggling and feeling self-doubt at the beginning of the term.

InterVarsity staff were led one particular week to pray about conversions. The power of prayer was revealed as one Bible study participant accepted Jesus, the first new Christian of the young chapter! “It’s about God’s timing,” Pranny said, “Not about what you can do.” God’s Spirit worked unseen, revealing itself when Pranny was disheartened.

The majority of the Cal Poly Pomona  ICF chapter is from China, but Pranny hopes to add more diversity to the group. She continues to pray for her students and for God’s call to be heard and followed in their lives.