Behind the Scenes—From Sketches to the Silver Screen 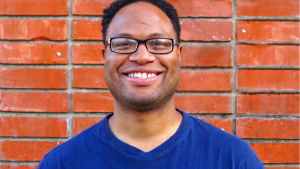 Ever since he was little, Romero dreamed of being in the movie industry. Now, as a professional animator who worked on Endgame (the highest-grossing film ever), Men in Black: International, Noelle, Star Wars: The Rise of Skywalker, and several Virtual Reality rides and commercials, it’s safe to say that his dream’s come true.

“I’m super excited. I’m super honored. I’m super blessed,” Romero said. “Not everybody gets to do this. I gotta thank the Lord for that. It’s all been him. He been working behind the scenes, and I been doing what I can do.”

Growing up, Romero had a lot to overcome. When he was six, he entered the foster care system. He and his brother lived in five different foster homes during the next twelve years. According to his website, Romero didn’t have “a good outlook. At the time, 1 of 4 foster kids became homeless after high school, and only 2 percent went on to obtain a college degree.”

“Foster kids understand foster kids,” Romero said. “We get each other: the neglect, the abuse, the hunger, the wishing you could be with your siblings. I understand it.”

In the middle of all the change and struggle that being a foster kid entailed, Romero discovered an outlet, a way to escape: art and school. He still remembers his middle school art teacher encouraging him while looking over his latest Dragon Ball Z drawings. Then in high school, when his 10th grade art teacher introduced him to the myriad of different art forms and media, Romero discovered his calling.

Still, Romero knew academics and art weren’t enough. In a YouTube video, he shares, “Who was going to be able to take the burdens and the pain and the anger and the frustration of being in the foster care system, of being taken from your parents? The only person who was able to do that for me was the Lord Jesus Christ. And that’s what changed my whole lifestyle. It changed my mindset of thinking that I’m a victim. Yes, I was a victim. But what was I going to do with that?”

After being introduced to Jesus at his fifth foster home, Romero’s faith continued to grow throughout middle and high school. He went on to earn a BFA in animation at art school, where he soon discovered an InterVarsity chapter at a neighboring campus.

“InterVarsity did a good job of bringing people together and giving us the understanding that we’re all under Christ,” Romero reflected. “I remember it all to this day, and it’s still awesome.”

He participated in both the school’s general InterVarsity chapter and Korean InterVarsity (KIV). Gathering for KIV’s large group worship nights and arts-related events, he soon discovered many similarities between Korean culture and his own African American culture, which helped him feel even more at home.

“God used InterVarsity to make sure that I was held accountable about my faith,” Romero said. “I could have just wilded out in college. No one would have known. But I think InterVarsity really helped keep me spiritually level-headed.”

Romero attended Chapter Focus Week three times and strongly encourages students to go. “That helped us students get away from the work that we were doing to be out in nature and also just experience God in a new way,” he said. “I didn’t have the finances at the time to go to these conferences, but InterVarsity helped me out a lot.”

Reflecting on his time in InterVarsity, Romero hopes to see the ministry continue to pursue and celebrate the God-given beauty found within each culture and invite even more people into God’s family. In many ways, that’s exactly what Romero longs to do in his own life: welcoming and encouraging others.

Of his many dreams for the future, one that stands out is his desire to set up his own business. There, he hopes to teach art to inner-city foster kids and give them a safe space to be creative. He longs to see even more foster kids like him fulfill their dreams and have their own “Yo, that’s my stuff!” moment.

Chapters like Romero's welcome students into a loving, supportive community that encourages them to grow spiritually.  Click below to find an InterVarsity chapter at your campus: