The Best Story of All 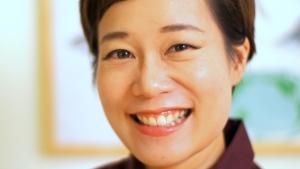 What makes a good story?

Author and InterVarsity alumna Yangsze Choo clearly knows. Her first book, a novel called The Ghost Bride about the Chinese world of the dead, has generated quite a bit of praise. Oprah.com picked it as a “Book of the Week”—in other words, a book they “couldn’t stop reading.” And USA Today called it a “beguiling tale.”

Yangsze’s inspiration for the story came from several different places. One is her own ethnic heritage. A fourth-generation Malaysian of Chinese descent, she grew up reading Chinese fantasy stories that contained ghosts and magic and elaborate depictions of the afterlife.

But she also had C. S. Lewis’s The Great Divorce and its portrayal of heaven and hell in mind as she wrote. The idea of “parallel worlds”—worlds that exist alongside ours—put forth by Lewis and by classical Chinese literature plays a central role in The Ghost Bride.

Admittedly, however, Yangsze said most of the novel came from her own imagination, sparked by a mention of “spirit marriages” (a marriage between a living person and a dead person) that she read while doing research on another project.

Indeed, there is little connection between the life of the novel’s protagonist, Li Lan—a poor seventeen-year-old girl living in nineteenth-century Malaya who receives an unusual marriage proposal—and Yangsze’s present reality as a writer and stay-at-home mom of two. But her own life contains stories that, if not quite so fantastical, are just as interesting and poignant as the one she weaves in The Ghost Bride.

Adjusting to a New Culture

Coming to the United States for the first time to attend Harvard University is one of those intriguing stories. “I had never seen the campus before I arrived with my two suitcases,” she said. “A lot of international students do this. Everyone else had their family that first day, and I felt very lonely.”

In addition to the adjustment to college life, though, she faced the adjustment to a whole new culture—one unlike the many places she’d lived in growing up, such as Malaysia, Germany, and Japan. “Coming to the U.S. felt very strange to me,” Yangsze recalled. “Everything felt like it came right out of a movie—very iconic. . . . And Americans have so many consumer products; it was mind-boggling!” Thankfully, she found support and community from many other international students going through the same experience.

She also discovered who Jesus is at college—another beautiful story from her life. “I did not grow up in a Christian household,” she recounted. “But I always felt since I was a child that there was some sort of presence of God in my life. I wasn’t sure who he was or which god he was, but it was a very kind and comforting presence.”

When Yangsze arrived at Harvard, her curiosity about God led her to attend several different Bible studies, and to eventually get involved in InterVarsity at the invitation of a friend in her dorm. “I . . . started asking him a lot of questions, like ‘Why do you believe?’ and ‘How do you know this is true?’” Yangsze said. He didn’t have all the answers but suggested that others in InterVarsity might.

It was in the safety of the InterVarsity community that Yangsze came to understand who God is and surrendered her life to him. It was also a place where she developed significant relationships. “I’m still very good friends with many people [from InterVarsity],” she said, “even many years later.” And in fact, the friend who first invited her became her husband! She added, “The gift of InterVarsity was that it drew people together from many different areas. That was a real blessing to me.”

She was also blessed by the constant space she had to ask questions during college. From fellow students to churchgoers, she talked to as many people as she could. “A wonderful thing about college is you can ask as many questions as you want, because it’s expected of you,” Yangsze reflected. “I didn’t realize what a luxury this was until later in life. . . . God allowed me to run into many thoughtful, interesting people to answer my questions, and that was a great provision.”

Some questions, however, can’t be answered. And sometimes those questions create the most powerful—albeit painful—stories in our lives.

After several years in corporate jobs and at a startup post-college, Yangsze was forced to quit working due to a herniated disk. “It was difficult to transition from the corporate world,” she said. “I realized that there are limitations to the body—it won’t just fix itself. Coming face to face with that early on was hard.” She turned to God in prayer constantly.

Looking back now, she sees how formative that experience—and other painful points—have been in helping her learn to be honest with God. “It was difficult to say things to God like ‘I am angry’ or ‘I am disappointed,’” she said, “but I realized it was better to tell him, because when you stop telling him the truth you start to lose your relationship with him. I’ve received a lot of peace from that—‘the peace that surpasses understanding.’”

Becoming a published author has been its own mini story in her life—one that’s still unfolding as she juggles book signings and publicity appearances with her already full home life. But Yangsze has been grateful for the new adventure so far and the opportunities it’s given her to meet new people. “I’ve really enjoyed doing book events,” she said.

Her hope has been that people will enjoy the book but also find it thought-provoking—and so far, that seems to be the case. “People don’t really talk about what happens after you die in Western culture. Or what you hope for and fear,” Yangsze said. “I’ve had some great, interesting conversations with people.”

Ultimately, though, it’s the story of God’s love and faithfulness that is most powerful for Yangsze. That’s the Story that runs through every piece of her life. “My faith has been the backbone of everything, the thing that sustains me,” she said.

And while passion and fantasy make for great novels, Yangsze has learned that it’s often in the ordinary, everyday decisions that great stories are written. “When you are young, you want faith to be a big dramatic gesture,” she reflected. “But God is with us in all the mundane, routine moments, too. Life is a series of small, rather mundane things, and yet it’s very beautiful to have God with you all the way.”

That story is one this author will never stop telling.