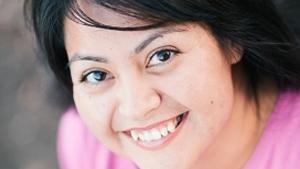 Noemi Vega’s friends in the dorm and in the marching band invited her to accompany them to an InterVarsity Bible study for an entire semester before she finally consented. Now Bible study is a passion for Noemi, and she loves nothing better than teaching students how to discover what she discovered in that Monday night Bible study her freshman year at California State University, Fresno.

“We were studying the book of Luke and Jesus came alive for me,” she recalled. “I grew so much in love with him. Today, Bible study gives me life because I am reminded of how good God is.”

Noemi’s first attempts at leading a Bible study were not very successful. As a sophomore she advertised a bilingual Bible study but she didn’t specify Spanish and English. So the people who began attending were bilingual in a variety of different languages. But she didn’t give up. She also tried to lead a woman’s Bible study.

Her senior year, Noemi attended Urbana 03 and was encouraged and inspired by all that she experienced. Orlando Crespo’s seminar on Being Latino in Christ, based on his just-published book of the same name, was particularly helpful. She returned to Fresno, inspired to begin another Bible study.

Along with a friend, she started a black and Latina Bible study called LaSoul. It continued for 3 to 4 years before it grew and split into two separate parts.

As an honors student in psychology, Noemi spent much of her senior year studying for the Graduate Record Exam and applying to graduate schools. Even though she was accepted into several programs she deferred for a year because she believed God was calling her to campus ministry with InterVarsity.

But before turning her back on a potentially lucrative career, Noemi needed God to show her that he would provide for her needs. “God met me one day on campus,” she said. With no extra money and not even time to go to the dining hall, people gave her food without her even asking. “God provided a meal.”

She also remembers waking in the middle of the night, crying about the students with blank, empty faces she had dreamed about. “I felt broken over so many students that hadn’t found life on this campus,” she said. “God was breaking my heart for Fresno State. I feel like I was called to this campus.”

Today, after being on InterVarsity’s campus staff for eight years, Noemi is still based at Fresno State. She is now the LaFe Specialist, helping start and grow chapters for InterVarsity’s Latino Fellowship in the Central Coastal region. “The reason I feel called to LaFe is because it will help InterVarsity reflect the community of God more fully,” she said.

Working with Latino students is very fulfilling but also very challenging. Many students are wrestling with their ethnic identity, trying to figure out how to relate with the majority culture. Many are also touched by the political debate over immigration policy in a very personal way. “There’s some beauty in our culture, and there are also some things that need to be reconciled and healed in our students’ lives,” Noemi said.

Last summer Noemi co-directed InterVarsity’s Borderlands Urban Project, which partnered with InterVarsity’s sister movement in Mexico, Compa, to explore immigration issues on both sides of the border. “It went so well, so much better than I expected,” Noemi said. She was surprised to learn the immigration issue was more complicated than even she expected. But she also learned that partnering with others can accomplish a lot.

In early February, Fresno hosted InterVarsity’s first statewide LaFe conference, Encuentro, directed by Javier Tarango-Sho. About 330 students attended, many more than the 200 who were expected.

“The most important accomplishment of Encuentro was letting the Latino students know that God made them for a purpose,” Noemi said. Such events typically spawn the growth of LaFe on many campuses. “There were many prayer requests written on a prayer wall from students who want LaFe on their campuses,” she said.

One of the challenges in LaFe ministry is finding healthy ways to grow missional LaFe groups that will reach out to other groups on campus. 'Latinos are good at relationships, but being intentional in sharing one's faith in those relationships may be a challenge," she said.

Noemi feels up to the challenge of campus ministry, based on her community of ministry supporters. “I am fully aware that when I am walking on campus I am not alone,” she said. “God is with me and the people that are praying with me are there with me.”